WHAT: Fusing modern Western forms of dance like ballet and hip-hop with traditional Indian ones like bharatanatyam and odissi, Mayuri is a dance troupe open to all members of the Tri-Co community. No creative vision is too bold for the intrepid club members, who mix their music and create with their own choreography. As co-head Shreya Kishore ’21 says, “We really do everything!”

WHO: Mayuri currently has two presidents, Kishore and Fariha Tamboli BMC ’21. Before she even stepped foot on campus, Kishore knew that she wanted to pursue extracurriculars focused on South Asian dance. “Although I do not have any formal training,” she says, “I have danced all my life and wanted to keep dance as an important part of my life in college as well.” She found Mayuri listed on Haverford’s “Clubs and Organizations” page, watched a couple videos of their performances on YouTube, and then showed up to practice once she was on campus.

DID YOU KNOW? As a member of Mayuri, your audience isn’t limited to Tri-Co students, faculty, and staff. Mayuri members regularly appear in shows hosted by Villanova’s undergraduate and graduate schools. And in September, the club was even commissioned to perform at Campus Philly’s annual CollegeFest, which takes place in Dilworth Park in front of Philadelphia’s City Hall.

GET INVOLVED: To join Mayuri, just shoot one of the three presidents an email or show up to practice! 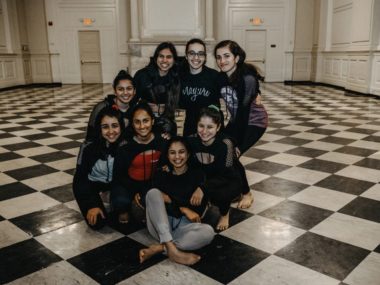