Over the past two years, the Haverford College Photography Collection has bought or been gifted hundreds of items, including Diana Markosian’s evocative Armenian landscapes and Hiroji Kubota’s stark black-and-white portraits of modern North Koreans. Now, for the first time, many of these new additions, some created by Pulitzer Prize winners, are being displayed together in an exhibit. Titled A Survey of Recent Acquisitions of Photographs from 2017-2019, it is on view in the Jane Lutnick Fine Arts Center’s Atrium Gallery through December 8.

“There are a number of extraordinarily fine pieces in this exhibit,” said Professor of Fine Arts William Williams, who is also the College’s curator of photography. He points out some of the most significant: a shot of an African teenager balancing a keg of water on her head, a shot of 1970s celebrity chef Edna Lewis mid-laugh, a late-nineteenth-century portrait of a grim-faced J.P. Morgan clutching the arm of his chair like a dagger.  “The best of the best, really.”

But the exhibit is more than just a cache of pretty pictures. Comprised of 40 photographs taken over the span of 170 years, it indirectly charts the evolution of photography from an expensive, time-consuming hobby into a high art form accessible to literally anyone with a cell phone. The oldest image on display, a sepia-toned steel engraving of Matthew Brady’s “James Fenimore Cooper,” was created in 1850; the most recent, Dan Nelken’s strikingly colored archival pigment print “Akella Sharah: Age 13. Carries a 5-gallon jerrycan of water (41 Ibs) home three times a day, Uganda,” was created in 2018. In the broadness of its scope, the exhibit functions as something of a visual history of important developments in pop culture and race relations in the past century, too. On one wall, Marlene Dietrich despairs over a run in her tights backstage and gossips with Andy Warhol at a black-tie party; on another, Burt Reynolds smolders at the camera with all the force of his mid-century machismo; on yet another, the Tuskegee Airmen undergo military training, black South Africans cheer as Nelson Mandela’s presidential motorcade goes past, and Barack Obama takes the oath of office at his 2008 inauguration. 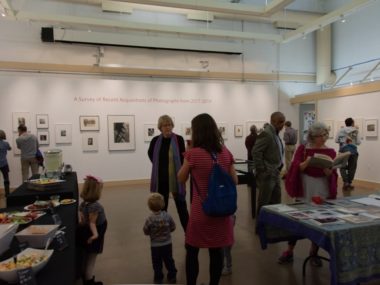 The Atrium Gallery at the exhibit opening.

Dave Baclus ’82 and Professor William Williams talk about the exhibit.

Courtney Carter ’17 and Professor William Williams talk about one of the photos in the exhibit.

The exhibit also features a massive diversity of photographic types. There are salt prints, or prints created through the exposure of chemically-treated paper to light, and gelatin silver prints, or prints created through the application of silver salts suspended in gelatin to a smooth surface. There are hand-pulled photogravures, which involve the etching of a copper plate, and hand-colored xerographic prints, which utilize dry-photocopying technology. But it is the photogram, as exemplified by Pulitzer Prize-winning photographer Ben Magid Rabinovitch’s “Photogram with Wine Bottle and Two Glasses,” that seems to capture Williams’s imagination the most.

Photograms, as Williams explained, are “cameraless images” achieved “by the action of light.”

The one featured in this exhibit, depicting a wine bottle and two liqueur glasses, is particularly unusual.

“You’d think a bottle would be light since it would take a long time for the light to go through, and then you would think that these things, the glasses, would be dark,” Williams said. “So the values are reversed there. How’d Rabinovitch do that? So, if you look at these things, they ask a lot of questions.”

Rabinovitch’s photogram represents a valuable addition to the Haverford College Photography Collection, which Williams describes as “one of the best collections of photography anywhere, particularly for a small college.” (Besides being one of the “best,” it’s also one of the largest of any liberal arts college in the nation.) Dating back to the 1870s, when the College first began purchasing photographs for teaching purposes, the collection—which is now housed in Lutnick Library’s Quaker and Special Collections section—contains over 5,000 individual items, many of them rare.

So, given the wealth of options to choose from, which photograph in the new exhibit is Williams’s favorite?

“Oh, that’s like asking a parent, ‘Well, who’s your favorite child?’” Williams said. “I’m going to leave it at that because I think that’s what you should decide when you come, see what picture most engages you.”

“A Survey of Recent Acquisitions of Photographs from 2017-2019” will be on display until December 8.