On Friday, September 6, the Cantor Fitzgerald Gallery kicked off its fall season with the forward-looking exhibit A Time for Farewells. Taking its name from the need to cast aside “the constraints of traditional notions and existing power structures” in our collective search for the future at a time of social and environmental turbulence, the exhibit—which will be on view through October 11—showcases sculptures, photographs, video shorts, collages, paintings, and media installations by ten international artists, including Haverford’s very own Professor of Fine Art Markus Baenziger.

“I want us, as students and people who are working in academics, to, basically, take control of how we imagine the future,” said Premjish, the Delhi-based artist, writer, and translator who serves as the exhibit’s curator, of what he hopes the members of the audience will take away from their visit to the gallery. “There are so many scientific projects and technological projects which are happening around us. There are massive changes and developments which are happening in biotechnology. We are also facing an environmental and ecological disaster. There’s a larger humanitarian crisis due to the refugee migration, which is happening right now. So the world is changing, and the world is changing rapidly, and so we have to think about the future, which has a solution for all of this or which could find a solution for all of this. [The possibility of a future] world which is just, equal, and right is what this exhibition is trying to talk about.”

Following his opening speech, Premjish took the audience—a diverse mix of students, faculty, staff, and alumni—on an extensive tour of the gallery, starting with Baenziger’s “Then Again,” a set of recycled-plastic pots that makes an implicit argument for sustainability as a necessity just as much as a way of life, and ending with Zoya Siddiqui’s “To God Shall the Alien Return,” an eerie collection of scenes from Lollywood sci-fi movies that addresses what it means to be an immigrant in this day and age (and country).

In between, he discussed many of the other pieces on display, including Vivan Sundaram’s “terraoptics,” a series of photographs of terra-cotta shards; Gigi Scaria’s “On Its Way,” a video loop of a train journey; Michal Martychowiec’s “The shrine to summon the souls,” a short that reflects on the legacy of Japanese war crimes; and Omar Wasim’s “Component No. 14 (As the Light Turns),” a non-traditional triptych which investigates how identity is inscribed upon the human body.

Sponsored by the John B. Hurford ’60 Center for the Arts and Humanities in conjunction with the Prameya Art Foundation and the Art Scribes Award, A Time for Farewells feels fresh because of its sheer topicality. At a moment in history when the United States, along with much of the rest of the world, is grappling with the effects of climate change, the ethics of immigration policy, and the consequences of inaction on both fronts, the opportunity to escape the present, even if only for a little while, is hard to pass up.

This stark relevance was not lost on the students in attendance, least of all Drew Cunningham ’20.

“I think that the exhibit is forward-thinking, highly conceptual, and exciting,” he sais.

Growth and structure of cities major Kate Silber, also a member of the Class of 2020, went so far as to say that A Time for Farewells was one of her “favorite exhibits that I’ve seen at Haverford.” As an aspiring urban planner, she was especially intrigued by the way it “highlighted the unnerving side of cities planning for their futures without addressing the fundamental issues of the present.”

“The curator talked about the theme of imagining the city as a body in some of the works, or conversely visualizing it void of people yet full of activity and construction,” she said “These are haunting ideas that we might sense in urban environments but ultimately allow to fade into the background, and the show brings them to the viewers’ attention.”

“Plus,” she added, “I had never seen my sculpture professor Markus Baenziger’s work [before]… it’s awesome!” 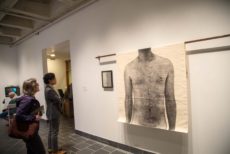 Artwork in the gallery. Photo by Cole Sansom ’19 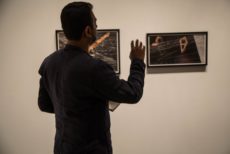 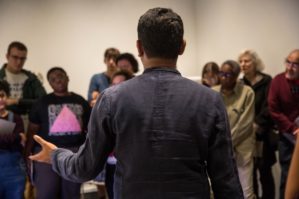 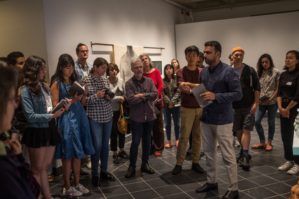 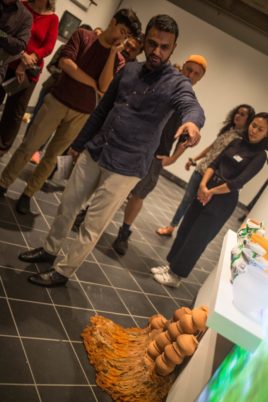