On Saturday, Sept. 7, Dr. Wendy E. Raymond was officially inaugurated as the 16th president of Haverford College—a position she has held since July 1, 2019—in the presence of students; faculty; staff; alumni; members of the local community, the Board of Managers, and the Corporation; and delegates from 90 institutions around the world.

The day included a special meeting for worship at the Haverford Friends Meetinghouse, an inauguration ceremony in Marshall Auditorium, a community luncheon, the planting of a yellowwood tree outside the president’s office to mark the occasion, and a panel conversation on “Inclusive Community and the Liberal Arts.”

The day was a celebration not just of the start of Raymond’s presidency, but also of her commitment to the values that fuel the mission of the College. Many of the speakers at the ceremony affirmed her dedication to diversity, equity, and inclusion in higher education, and spoke of her collegiality as a coworker and mentor.

“A colleague of Wendy’s described her as one of the bravest and toughest women she knows,” said Bryn Mawr College President Kim Cassidy from the stage in Roberts Hall. “She never gives up, standing by her convictions with passion and intelligence, no matter what. What a fitting leader for a community that believes so deeply in its values and lives by them as a central part of its day-to-day choices.”

“Haverford’s new president, in short, brings you a keen curiosity, an abiding commitment to honesty and clarity, clear values, and unshakeable personal courage—qualities that resonate with Haverford’s history and mission and will serve you well in the coming years,” said Carol Quillen, president of Davidson College, Raymond’s former home.

The new president, a distinguished molecular biologist, award-winning teacher, and academic leader, served as vice president for academic affairs and dean of faculty at Davidson since 2013. For 19 years prior, she was a professor of biology at Williams College, where she ran an active research laboratory with funding from the National Science Foundation and the National Institutes of Health. She is a Phi Beta Kappa graduate of Cornell University and earned her Ph.D. at Harvard University.

“Our faculty shares your commitment to promoting intellectual inquiry and creative expression, fostering vigorous debate, and cultivating an environment of mutual respect,” said Haverford Associate Professor of Political Science and Clerk of Faculty Zachary Oberfield in his welcome remarks from the faculty. “We are eager to work shoulder-to-shoulder with you in pursuit of these goals.”

Oberfield was one of 12 speakers at the ceremony, including Emily Lin ’20, one of the student representatives to the presidential hiring committee, who read a poem, “Walking with My Delaware Grandfather,” in honor of indigenous peoples. Clerk of the Corporation Amy Taylor Brooks ’92 opened the service, and Co-Presidents of Students’ Council Katherine Leiferman ’20 and Mariana Ramirez ’20, President of the Alumni Association Natalie A. Wossene ’08, and Chair of the Staff Association Executive Committee Noemí Fernández, offered welcome greetings as representatives of their respective constituencies. Fellow college presidents Quillen (Davidson), Cassidy (Bryn Mawr), and Valerie Smith (Swarthmore) also gave remarks.

(Continued after the gallery.) 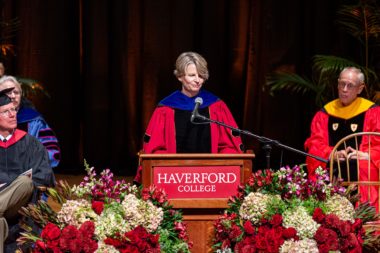 The delegates included folks from 85 different institutions around the world.

The procession of delegates.

The Isaac Sharpless quotation that was presented to President Raymond by Board chair Charlie Beever. 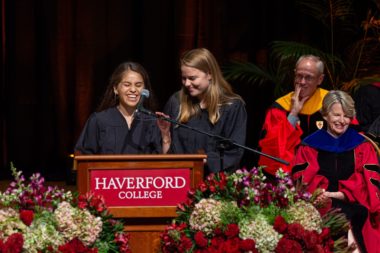 Co-Presidents of Students’ Council Mariana Ramirez ’20 (left) and Katherine Leiferman ’20 offered welcome remarks from the student body during the ceremony. 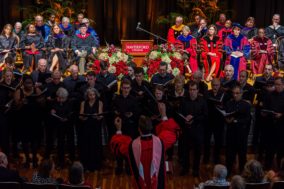 A massed choir of students, alumni, and friends sang “Look to This Day” at the ceremony, conducted by Nathan Zullinger. 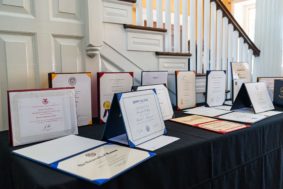 Well wishes from colleges across the country. 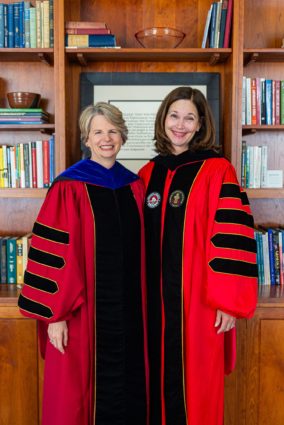 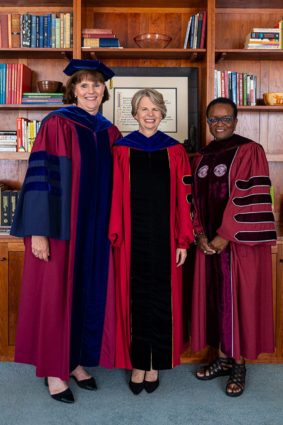 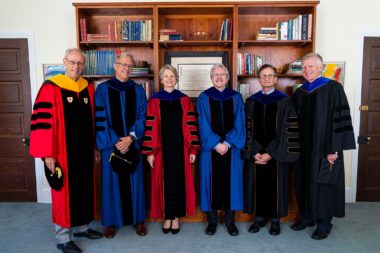 President Raymond visited with attendees at a luncheon under a tent on Founders Green. Photo by Cole Sansom ’19.

The Haverford College Arboretum led a tree planting in Wendy’s honor after the ceremony and luncheon. Photo by Cole Sansom ’19. 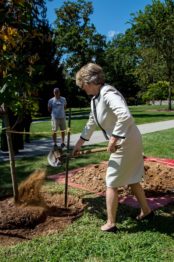 President Raymond threw the first shovel-full of dirt on her inaugural tree, a yellowwood, which lives just outside her office in Founders Hall. Photo by Cole Sansom ’19. 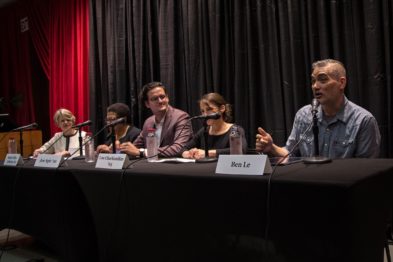 An inaugural conversation on “Inclusive Community and the Liberal Arts” featured alumni, students, and current faculty. Photo by Cole Sansom ’19.

In her inaugural address, Raymond spoke about the power of liberal arts education, the history of the College, and Haverford’s foundational Quaker principles of integrity, community, and the life of the mind.

“There is no other institution of higher education at our level of intellectual, creative, and experiential caliber that also offers a lived Honor Code that is wholly governed by students, that also strives for consensus decision-making at all levels, and where every student’s education culminates in a senior-year thesis project,” she said. “This combination, in the context of all else that Haverford offers, makes this the college we know and love. These attributes translate into the words ‘trust, concern, and respect,’ which ground our Honor Code and the way we carry ourselves in community.”

But Raymond also noted that there is still work to do in fulfilling the promise of those bedrock values, and she emphasized her passion for helping to steer that work. The biggest current challenge facing the Haverford community, she said, is in being able to hold differing viewpoints or perspectives, and so she encouraged the assembled crowd to embrace the power of the word “and.”

“What would it take for us to enhance both our individual contributions to community and the community’s receptiveness of each individual?” she asked. “What would it take for us to allow everyone here to stake a claim in Haverford, and for Haverford to stake a claim on every person’s full inclusion and success? … Might we take a core aspect of liberal education—the capacity to listen to and fully consider multiple points of views in order to derive new questions and new understanding—and apply it to how we build a true community? Can we hold, at the same time, seemingly immiscible ways of being, and ways of looking at the world, long enough to move forward together? I believe that at Haverford, we can.”