WHAT: When Anna Fiscarelli-Mintz ’22 came to Haverford, she was eager to share her experience and interest in figure skating with her peers. Her physical education instructor suggested she form a club, in order to receive funding from the Office of Student Leadership and Engagement that would minimize cost barriers associated with the activity. She, alongside co-president Althea Sellers ’21 and founding members Nuria Benitez ’22, Angelica Johnson ’22, and Anita Zhu ’22 started the Figure Skating Club, with a mission to “make figure skating accessible to interested students by connecting them to affordable skating resources and opportunities to practice and improve in cooperation with a local figure skating rink.”

WHO: “Anyone who wants to spend some time on the ice!” says Benitez. “The Haverford Figure Skating club seeks to foster a love and enjoyment of figure skating amongst students at any and all levels of ability and skating experience.”

WHEN: The group meets at the Philadelphia Figure Skating Club and Humane Society (PSCHS), a local ice rink, which is less than a five-minute walk from Haverford’s campus. “We sponsor free admission and skate rental for the first 25 students to register for the session each week, and all Haverford students can receive a 50% discount on admission and $3 skate rental with a valid Haverford I.D. at the front desk,” said Fiscarelli-Mintz.

DID YOU KNOW? Modern figure skating grew out of a nineteenth-century phenomenon called “ice dancing,” a variant of traditional waltzing! Figure skaters can spin on the ice at a rate of up to 300 RPM (rotations per minute), a comparable rate to the force experienced by astronauts during centrifuge training!

GET INVOLVED: The weekly meetings of the Figure Skating Club at PSCHS are open to all students, and Sellers and Fiscarelli-Mintz plan to expand the club’s offerings to include private ice time, learn-to-skate sessions, and more frequent trips to the rink in the future. 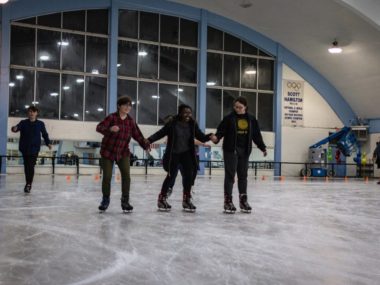 Skating at the local rink with the Haverford College Figure Skating Club.

Anna Fiscarelli-Mintz ’22, co-president of the Figure Skating Club, shows off a jump. 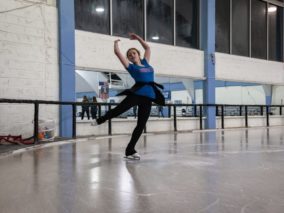 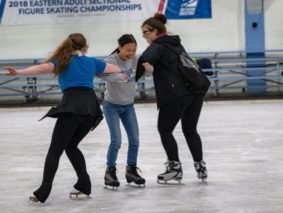