Haverford is known for many things: the long-standing Honor Code, student self-governance, and the Customs program are just a few of the elements of the College experience that instill a unique sense of community among Fords. But while the student body notoriously gathers in the Calvin Gooding ’84 Arena twice a year for Plenary, the bleachers see action all year long. With a commitment to educating the whole student, Haverford requires students take six quarters of physical education to graduate, and the diversity of the College’s P.E. offerings ensure that the Black Squirrels stay active throughout the year.

On a sunny day in April 1905, in Cambridge, Mass., the crowd in the stands went wild. With a swift kick to a 1-0 victory at Harvard University’s Soldiers Field, Haverford College became the winner of the first modern-day intercollegiate varsity soccer match over their crimson hosts. This match established Haverford as an athletic powerhouse despite its small size, and exemplifies the College’s long-standing commitment to the physical well-being of its students.

A popular joke on campus boasts that Haverford’s football team has been undefeated for more than 45 years, with Bookstore merchandise to boot. While a true claim (Honor Code!), the College discontinued the football program in 1972 due to a lack of interest in the sport from students. In 1973, an article in the Bi-College News detailed student frustration with a lack of more nontraditional physical education offerings, and called for the establishment of the Athletic Advisory Council to better communication and programming for the department.

Today, Haverford is home to an impressive slate of 23 varsity teams, including the co-ed cricket team, the best (and only) one of its kind in the country.

Haverford’s physical education program predates even that early Haverford/Harvard soccer game; according to an entry from the 1896-1897 course catalog, “the Gymnasium has been refitted with several improved gymnastic appliances, and now includes in its equipment rowing, sculling, and wrist machines, chest weights, striking-bag and drum, and the necessary apparatus for the gymnastic game of basket-ball.” The catalog goes on to explain that first- and second-year Fords were required to take physical education classes given by the director of athletics: two during “freshman” year and one for sophomore. “While the work is required of the two lower classes only,” the book states, “it is elective for the upper classes, and it is expected that the majority of their members will take advantage of the advanced courses arranged.”

Today, the College maintains a physical education requirement for all students. Varsity athletes can fulfill their requirement by participation in their sport, but many other students choose to take advantage of other offerings. Those required six quarters of P.E. must be fulfilled before the end of sophomore year. True to the 1896 catalog, however, many students fulfill more than the required number of physical education credits.

Currently, there are more than 30 different options for students looking to take a physical education course, including instructional classes (like yoga, pilates, aerobics, and karate), intramural offerings (like flag football, tennis, and volleyball), club sports teams (like Ultimate Frisbee, soccer, badminton, and crew) and the 23 varsity sports. Some more unique options for credit? Students may provide play-by-play for varsity matches, go bowling in nearby Wynnewood, work on the Haverfarm, or log community service through the Marilou Allen Office of Service and Community Collaboration.

“We hope that the variety of offerings will appeal to our broad based student body,” said Director of Haverford Athletics Wendy Smith ’87.  “The diversity of offerings also recognizes the varied level of physical exertion needed to complete a class—again hoping to meet the varied needs of a diverse student population.”

Some of the instructional courses are taught by students, like Shotokan Karate, which is taught (and was proposed by) Kaden St. Onge ’20. “Our class is designed to be a place to learn fundamental martial arts skills specifically through the style of Shotokan karate,” says St. Onge, a black belt since age 14.

Intramural teams are a popular option for students as well, and differ from club sports in that they do not travel or compete with other colleges. This makes for an inclusive, low-stress environment for students to try something new or sharpen their skills.

“Everyone is welcome, every level, and we often have a teaching court for those who want to learn more about tennis,” said co-head of intramural tennis Sarah Jesup ’20.

Not much of a team player? The Haverfarm offers a unique opportunity to earn P.E. credit by helping students learn the basics of sustainable agriculture. Established in 2010, The Haverfarm is a year-round farming and educational space designed to integrate sustainable food and agriculture into the academic and extracurricular lives of Haverford students, faculty, staff, and community members.

“Each week, students spend three hours working alongside experienced student-farmers and the fellow, gaining experience in weed identification, greenhouse seeding, soil management, composting, planting, and harvesting,” she said. “We have loads of fun, and often students who get to know the farm via P.E. end up becoming frequent volunteers and even applying for summer internship positions.”

The robust physical education program is a point of pride for the College and the Athletics Department. “For a small community, it is very impressive that we are able to sustain so many different activities at such a high level,” said Smith. “It is a testament to our students who excel in all facets of their lives and the College which supports each student’s personal growth.” (Continued after the gallery.) 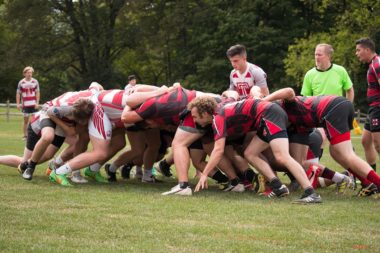 The Rugby team, a club sport for which students can receive PE credit, played against Temple. Photo by Alexandra Iglesia ’21.

Badminton is just one of the club sports that students can play for PE credit. Photo by Ruiming Li ’22.

You can get physical education credit for playing Club Volleyball. Photo by Alexandra Iglesia ’21.

You can get physical education credit for playing Club Volleyball. Photo by Alexandra Iglesia ’21.

Students volunteering at the Haverfarm help with maintenance of the HCA Garden beds and receive PE credit. Photo by Alexandra Iglesia ’21 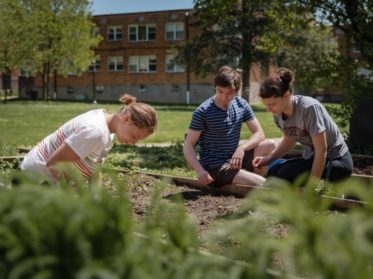 Students volunteering at the Haverfarm help with maintenance of the HCA Garden beds and receive PE credit. Photo by Alexandra Iglesia ’21.

Big Donkey Ultimate tied for fifth place at their most recent regional tournament.

More than 53% of Haverford students are on a varsity or club sports team, so hundreds of athletes competing on club teams comes with a strong sense of commitment, community, and tradition.

Haverford’s two Ultimate Frisbee teams are some of the most popular among students, with each sporting about 30 members. Both teams welcome students of any gender identity or expression, and Big Donkey Ultimate (BDU), a historically men’s team, has been around since 1985 and the Bi-College Sneetches, the women*s team, since 1993.

In addition to traveling to tournaments, said BDU captain Michael Weber ’19, “we host two tournaments on campus every year, which is very rare for a college team. Layout Pigout is a competitive spring tournament that brings some top Division III teams from the Northeast and mid-Atlantic. Haverween is a fall tournament we co-host with the Sneetches where all teams are highly encouraged to come in costume. There have been some pretty impressive ensembles over the years.”

“Our fall season is our developmental season, where we teach new players, and we typically play outside until mid-November,” said Sneetches captain Paloma Paez-Coombe ’19. “In the fall we compete against other teams in the area at weekend-long tournaments usually in Pennsylvania or New Jersey. The spring is our competitive season so we have a couple pre-season tournaments before we play in the college series, and play teams from farther away the higher up the competition level we get. We start playing outside again after spring break and usually end at the end of April after regionals.”

Another year-round offering is Club Badminton, which competes against other Philadelphia-area schools like Bryn Mawr, Villanova, Temple, and Swarthmore.

“Badminton is not just a sport you play in the backyard,” said captain Cecilia Zhou ’19. “Competitive badminton is fast, intense, and strategic. It’s a lot of fun once you start to learn it, so we welcome anyone who is interested to come to play with us.”

Haverford’s crew team, which has been a staple of the athletic community for 17 years, exemplifies that competitive success is best paired with a sense of humor and willingness to have fun.

“In contrast to the popular belief, we actually do not row on the Duck Pond,” laughed captains Pamela Gonzalez ’20 and Jacob Epstein ’21. “Our practices are off-campus so joining our team is a great way to get away from the HaverBubble. The stretch of the [Schuylkill] river we row on has beautiful sunsets. And don’t let us get started on the beauty of fall when the leaves start turning all shades of orange!”

With so many unique Haverfordian mascots to choose from (Black Squirrels, Big Donkeys, and Sneetches, oh my!), it is certainly hard to crown a winner, but the Men’s rugby team, the Angry Young Newts, might take the cake. Founded in the mid-1960s but dormant until the early 2000s, the rugby team has found great success in recent years.

“We have gone undefeated for a full two years now,” said captain Drew Evans ’19. We are really good at what we do! When the team was revived a decade or so ago, it was extremely casual, we never had a standing coach, and never got very organized. Now we have really focused up and become a serious, competitive team here. We work hard, and we are successful.”

With their smallest player standing at 5’5”, 135 lbs. and their largest at 6’2”, 325 lbs., the rugby team welcomes players of all sizes and experiences. A fun tradition for the team? Their annual alumni game, which will take place on Saturday, May 4, this year.

No matter the sport, all of Haverford’s teams play at a level that is uniquely exceptional for such a small college.

“It always impresses me that at a school this small, we can consistently build competitive teams that can challenge schools with enrollments that are two to four times our size,” said Weber.

By offering physical education credit for so many different activities, Haverford is truly committed to upholding the athletic department’s motto: mens sana in corpore sano, “a healthy mind in a healthy body.”