It’s the most wonderful time of the year: when Barclay Hall becomes Darklay Hall and the other dorms on campus wrestle with the fact that their names don’t carry a pun as catchy to reflect their commitment to the annual Do it in the Dark competition.

Established five years ago, Do it in the Dark (DIITD) is a multi-faceted competitive event for which Haverford students challenge themselves to cut down energy uses in the name of sustainability. Run by the Committee for Environmental Responsibility (CER), DIITD encourages the Haverford community to make an impact on the College’s carbon footprint.

“DIITD is an energy-saving competition where dorms across campus compete for bragging rights by curbing wasteful energy habits with the overall winner being the dorm with the greatest percent reduction in energy use,” said student representatives of CER via a collective e-mail. “Outside of saving energy within dorms, CER hosts numerous events over the three-week competition to help raise awareness and start conversations around sustainable practices on campus.”

These events included a range of fun activities—from a “Skate House singalong” by the Duck Pond to a vegan-baking workshop in VCAM. Haverford’s improv comedy group, the Throng, even hosted a DIITD-themed show during the last week of February. 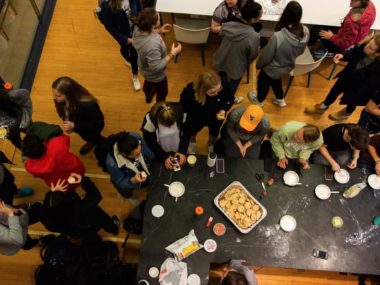 Attendees jostled to decorate their vegan cookies at the CER event, sponsored by the women’s soccer and field hockey teams. Photographed by Arshiya Bhayana ’22.

A cookie from the vegan-cookie-baking event, sponsored by the women’s soccer and field hockey teams. Photographed by Arshiya Bhayana ’22.

Cookies from the vegan-cookie-baking event, sponsored by the women’s soccer and field hockey teams. Photographed by Arshiya Bhayana ’22.

Said CER, “These events were a great way to engage with the larger Haverford community about the competition and sustainability on campus while also having an awesome time!”

While total electricity usage across all dorms was down an impressive 10 percent, Gummere Hall reigned supreme as the dorm with the greatest reduction in energy usage: 19.9 percent since the start of the competition.

In past years, the competition has been restricted to North Campus dorms, because the Haverford College Apartments (HCA) are not equipped with the proper equipment to gauge energy reduction. This year, CER sought to change this exclusion, and for the first time, students in HCA were also able to participate in Do it in the Dark by way of the meatless challenge, which allowed apartment residents to earn points for every meal consumed without meat.

“We wanted to allow the HCAs to be able to participate in DIITD in some way because in past years they have not been able to compete,” said CER, “We thought the meatless challenge would be a good way to not just have the HCAs, but everyone on campus, be a part of a challenge that aims to the overall goal of more green eating. The challenge promotes people to push themselves to eat a different way, and for people that are already vegan they could sponsor someone that lives in the dorms to eat meatless or vegan! No better time to implement this challenge than during DIITD.”

The winner of this year’s meatless challenge? Apartment 38.

For the members of CER who organized Do it in the Dark (Vaidehi Agarwalla’19, Johanna Batterton ’21, Margaret Chen ’21, Becca Boden ’21, Johnluca Fenton ’21, Ally Edwards ’22, and Ester Maja ’22), the success of this year’s competition is a promising indication of students’ commitment to sustainability on campus and in their lives.

Overall, in three weeks the College saved 6,400 kilowatts of electricity, eliminating 4.6 metric tons of carbon dioxide from our atmosphere. That’s equal to 517 gallons of gasoline, 5,025 pounds of coal, or 586,108 phone charges eliminated!