Space, the “final frontier,” has long captured imaginations and driven humans to seek a greater understanding of the universe. Thanks to Galaxy Zoo, a citizen science project that allows any interested individual to classify galaxies by their shape and characteristics online, scientific research on astrophysics is reaching new heights.

Overseen by Oxford University Professor of Astrophysics Chris Lintott with Project Scientist and Haverford Associate Professor of Physics and Astronomy Karen Masters and a team of nearly 30 other researchers, Galaxy Zoo has been recognized around the globe for its user-friendly and meaningful approach to citizen science.

“Citizen science is an important technique to help us deal with the data deluge in science today,” said Masters. “It opens up kinds of analysis which are not possible with computers, as well as working with computers to improve automated analysis. More than this, citizen science is a way to involve thousands of people in real research online, and teach about the methods and processes of science.”

Masters and Lintott have watched Galaxy Zoo grow from a single project to the foundation for a multidisciplinary platform for online citizen science, called the Zooniverse. Zooniverse projects call on the help of citizen scientists for analyzing data in fields ranging from archeology to medicine, and Zooniverse data has been cited in hundreds of publications on these subjects.

Zooniverse has over one million registered volunteers who assist in a variety of projects including “Shakespeare’s World,” “Solar Stormwatch,” “Orchid Observers,” “Modern Muses,” and “Bat Detective.” The platform has been recognized with numerous awards for its contributions to citizen science, including a Google Impact Awareness Award, and the Royal Astronomical Society’s 2019 Group Achievement Award for Galaxy Zoo.

“Chris is the principle investigator of both Galaxy Zoo and the Zooniverse,” said Masters. “He conceived the projects, and led many of the funding proposals to provide funds to build and run the Zooniverse. He works directly with the developers and others involved in running the site.”

This is why Masters invited her collaborator to campus this semester to speak about his work and the Zooniverse with Haverford students. Lintott was a distinguished visitor in mid-February and gave two talks, “Seeking the Unusual: Citizen Science in the LSST Era” and “From Peas to Penguins: Adventures in the Zooniverse.” He also toured of the Strawbridge Observatory, particularly the facility’s 16-inch telescope and CCD-imaging capabilities used by Masters’ “Observational Astrophysics” students. (Continued after the gallery.) 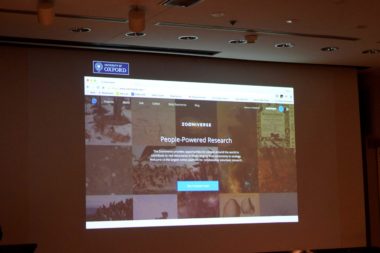 Distinguished Visitor Chris Lintott, professor of Astrophysics at the University of Oxford, talks about his adventures with citizen science and citizen scientists in the Zooniverse. Photo by Sarah Jennings ’21 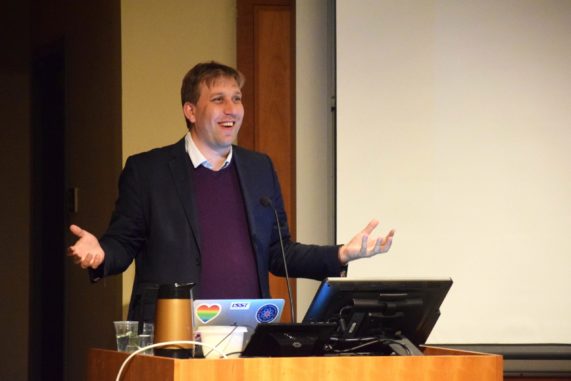 “Chris is well known in the United Kingdom as a keen amateur astronomer, as well as a professional astronomer, and has appeared on the TV show The Sky at Night since he was a teenager,” said Masters.

After his visit to Haverford, Lintott said, he will return to Oxford with a renewed focus on “Planet Hunters,” another Zooniverse project.

“As for next steps, he said, “I’m really interested in combining the efforts of our volunteers with the best of modern machine learning—something my team in Oxford is working on—and I’m very much enjoying hunting for planets at planethunters.org.”

Meanwhile, Masters has focused her attention on collecting the next generation of big data on galaxies, specifically working with the Sloan Digital Sky Survey to observe rich, three-dimensional “data cubes” of a set of galaxies, and is working with students to apply citizen science techniques to analysis of these data in two Galaxy Zoo spinoffs, Galaxy Zoo 3D and Galaxy Builder.