Nineteenth-century wallpaper, mid-20th-century Hollywood film, and modern tropical resort advertisements will converge this week in the Visual Culture, Arts, and Media (VCAM) building at Your Special Island, an exhibition featuring the work of artists Andrea Chung, Rachelle Dang, and Ming Wong exploring visions and versions of “the tropical island” as an imagined reality constructed by and for imperial pursuits.

The exhibit, which is on view in the VCAM’s Lower Create Space through March 8, celebrated its opening on Feb. 7 with a reception and talk by curators Courtney Lynne Carter ’17 and Maya Berrol-Young BMC ’17. Artist Rachelle Dang was also on hand to introduce the show and her art.

“There are certain stereotypes, tropes, and images that one associates with tropical places,” said Carter, the John B. Hurford ’60 Center for the Arts and Humanities post-baccalaureate fellow. “The tropics are imagined to be simultaneously idyllic and dangerous. They are adventurous, but, in a resort, sanitized. They are exotic and familiar. So there’s all these paradoxes at play in these imaginings. These are the kinds of tropes that these artists are taking on in their critique.”

The exhibit showcases the work of three artists who use video, archival photographs, digital collage, and sculpture to explore the post-colonial subject of tropical island sites. One wall displays Dang’s site-specific alteration of a 19th-century French wallpaper that depicts a colonized tropical landscape. Also by Dang, sculptures of breadfruits and a model of a botanical shipping container explore the produce’s history of import from Pacific islands to feed slaves in Caribbean islands. Video installation artist Ming Wong’s work is a video collage that splices together professional and internet-sourced performances of South Pacific’s song “Bali Ha’i” to explore cinematic representation of Pacific Island cultures and the performativity of gender and ethnic identity. Andrea Chung’s six-work series sources archival photos of slaves, but removes the figures in the photos and recontextualizes them with text from advertisements for modern Jamaican resorts, linking tourism to histories of slavery.

The artists use diverse materials and artistic approaches to emphasize the histories of exploitation in tropical island sites, the movement of goods and people that enable the spread of empire across geographies, and the echoes of imperial violence that persist today.

“We are tracing the imperial histories that not only have constructed these conflations of people and place, but have done so in order to hide those histories,” said Carter. 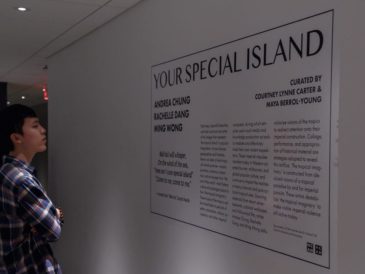 The gallery for “Your Special Island.” Photo by Patrick Montero. 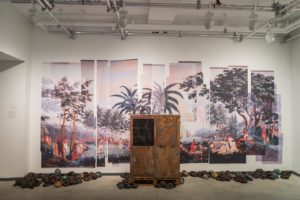 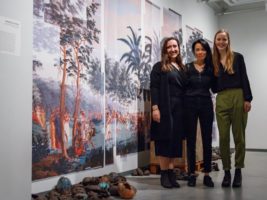 Carter and Berrol-Young began work on the exhibition in October 2018. After graduating, both Bi-Co alums spent a year abroad in Southeast Asia: Carter in Singapore as a dean’s fellow for Yale-NUS College; Berrol-Young in Thailand as a Fulbright English Teaching Assistant. During a visit together in Singapore, the two first discussed themes of image and imperialism that are now represented in the show. When Carter returned to campus last fall, she had the opportunity to mount her own Create Space exhibit, and reached out to Berrol-Young, who designed an independent art and politics major and minored in museum studies at Bryn Mawr College, to co-curate an exhibition together.

“We developed this critical lens here [in the Bi-Co], and then went out into the world where we started thinking critically about the things we were seeing in the tourist industry and these different tropical sites that we were both living in and traveling to,” said Berrol-Young. “We feel very lucky to be able to bring that critical lens and the work of these amazing artists to this space.”

Multiple studio visits with artists and consultations with professors and art professionals helped the exhibition come together in just a few months. Funding from the VCAM and HCAH also made possible collaboration with technicians, specialists, designers, other contractors. The result is an exhibition where visitors can interact with different artistic forms that delve into the construction of tropical island imagery and what it says about representation and colonial legacies today.

Says Berrol-Young: “That process of finding artists who are thinking about these imperial legacies that we were seeing play out in the world, bringing that back into this space, and being able to introduce these artists to this community and to each other has been a really exciting process.”