Zapotec, a language family indigenous to the land in the Mexican state of Oaxaca, faces a unique threat after centuries of colonial and state suppression. Language preservation activism in the region seeks to keep the language, and the culture it embodies, thriving in Oaxaca and in diaspora communities. Dizhsa Nabani is a project that brought documentary film to existing language preservation efforts in a Oaxacan Zapotec community, creating a new medium to share preservation work and give exposure to the facets of Zapotec culture that are inseparable from the language itself.

Last Monday at the Visual Arts, Culture, and Media building’s screening room, the project’s collaborators presented their work in full for the first time at Haverford. The roughly 45-minute finished documentary was the first product of DocuLab, a new program jointly run by VCAM and the John B. Hurford ’60 Center for Arts and Humanities, which develops student-faculty documentary work. The program’s first effort has been released in episodic installments online for a couple of months, and was shown to two audiences in Los Angeles before its reveal at Haverford. Later this month, the project crew will also show the documentary at four locations in Oaxaca, and it is also airing every Saturday in November on Philadelphia Community Access Media.

“When we talk about language, part of these language preservation efforts need to be tied to the other features of identity—food, music, lifestyle, work—and I think we were able to incorporate them,” said Zapotec language activist Moisés García Guzmán, who teaches and leads efforts to support Zapotec in his hometown of San Jerónimo Tlacochahuaya, Oaxaca, Mexico, and was one of the film’s producers. “We had many people directly from the community that gave their perspective on how what they do helps to strengthen that identity as Zapotec people.”

The documentary includes 10 episodes that range from three to seven minutes long, focusing on one aspect or member within Tlacochahuaya. In two segments, García Guzman’s mother Angelica demonstrates how to cook beans flavored with a local herb and prepare chocolate. In another, the community’s youngest speaker of Zapotec talks about his work to make complex headdresses for a dance called conquist or “the dance of the conquest.” In fields, in homes, and in classrooms, Dizhsa Nabani shares Zapotec not just as a language, but as a lifestyle.

“We created something that I never could have created on my own,” said Assistant Professor and Haverford Chair of Linguistics Brook Lillehaugen, who has partnered with García Guzmán to support Zapotec language activism for several years. “[Moisés] has very clear motives in what he wants to achieve with Zapotec in his community, and here was a chance to bring this funding, this talent, this time, this professional equipment—and when the possibility came up, I knew that his ‘Zapotec agenda’ could utilize this.”

In the VCAM screening room, almost every seat was filled for the unveiling of the work. Most of the project’s collaborators were present, including García Guzmán, Lillehaugen, translator Felipe Lopez, production assistant Hilary Brashear ’13, and the five Bi-Co students and alums who were inaugural DocuLab fellows. Sabea Evans ’18, Kathryn Goldberg BMC ’18, Marcelo Jauregui-Volpe ’18, Edward Ogborn ’19, and Katie Rodgers ’18 all brought different academic and technical skills to the project as linguists, film producers, and directors. All had the chance to sharpen and broaden their skillsets in the eight-week summer project. [Continued after the gallery.] 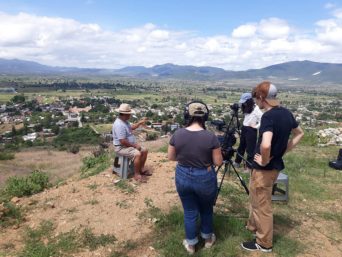 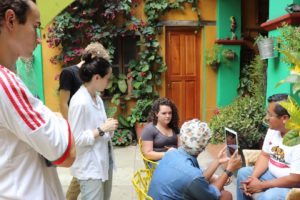 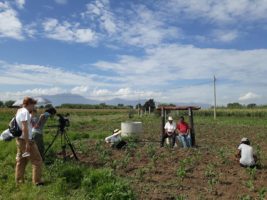 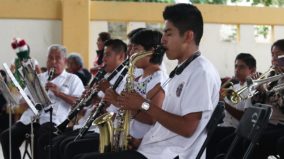 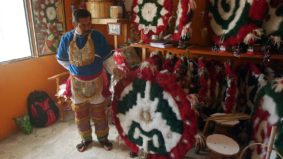 “I took many documentary production courses at Haverford, so my filming and editing background helped me on the technical and creative side of things,” said Jauregui-Volpe. “However, I had to learn how to work with a team in a creative environment, since most of my film projects were solo efforts. Me and the rest of the team had to learn how to listen, communicate, and make tough decisions together.”

All students who participated also took classes in film and linguistics last semester to prepare for the summer work. The arc of the entire project, then, extended more than nine months, and after countless hours of filming and editing, collaborators finally got the chance to celebrate their work.

“It was an amazing summer and an amazing project,” said Rodgers. “Oaxaca is now my favorite city. I’m really proud of the work that the team put in and of the 10 short films that we made. I hadn’t watched them since we completed the project in the end of August, so seeing it after a few months gave me the chance to really appreciate the work we’d done.”

The screening was also notably attended by Carlos Torres, Consul of Media and Promotion at the Mexican Consulate in Philadelphia. Especially given the historical relationship between the Mexican state and indigenous languages, work like Dizhsa Nabani and social media campaigns like #UsaTuVoz, which encourages users to write posts in indigenous languages, hold special relevance.

“Whenever we had a release [of Dizhsa Nabani episodes online], we had many social media comments in Zapotec, so we were seeing this engagement from the people,” said García Guzmán.

The film team’s next step is a tour of Oaxaca to screen the film to new audiences. Screenings will take place in the town of Teotitlán del Valle, San Jerónimo Tlacochahuaya (where the documentary was filmed), and then two sites in Oaxaca City, the largest city in the state. Early next year, there will also be screenings in New York at the annual meeting of the Society for the Study of the Indigenous Languages of the Americas, and at Texas Linguistics Society 2019 in Austin. With so much outreach in person and digitally, the project has a diverse audience, which has allowed the project to reach people in exciting ways.

“When people leave [San Jerónimo Tlacochahuaya], you realize that your language is important, that what you ate is important, and you want to go back and say, ‘Hey, I don’t want this to get lost,’” explained García Guzmán. “When they saw the documentary, when they saw the food being prepared, I know many people had memories and said, ‘This is what my grandma used to cook, this is what my dad used to do, this is what my neighbor used to do.’ It creates that sense of belonging, and that’s something I really like as a result.”