In the downstairs Create Space of the Visual Culture, Arts, and Media building (VCAM), photography and recorded narratives express the landscape of public art across Philadelphia. Off the Wall, an exhibition curated by Phillip Norman ’19, Isabella Siegel ’19, and Colin Fredrickson ’20, explores the creations of 17 Philly artists through photos of their graffiti, street art, and public art alongside oral histories in which the artists to speak on behalf of their work.

The exhibition synthesizes the three students’ summer internships supported by the Center for Peace and Global Citizenship (CPGC) that saw them explore questions of narrative, built environments, and the politics of place. Norman pursued an independent project using his “Mobile Story Center,” a second-hand road bike, to venture around Philadelphia conducting oral histories with underground artists, civic curators, and complete strangers. Siegel and Fredrickson both supported the work of Paper Monuments, a New Orleans-based public art project aimed at crowdsourcing designs for art that equitably represents the people of New Orleans.

“We decided to make it simple in terms of presentation, where public art, graffiti, and street art are in three different sections, but then theoretically… these are all individual artists coming from individual perspectives,” said Siegel, a fine arts major who specializes in drawing. “They cross over a lot of these different boundaries and categories of art, and the whole point is that you can listen to their oral histories, where they talk about where their art is coming from and what they’re doing.”

The exhibition explores three groupings of wall art: graffiti (illicit works that are often text-based), street art (works lacking institutional support that exist in the gray area between legality and illegality), and public art (projects that receive support from the city or organizations, like those of Mural Arts Philadelphia). Each category has multiple pictures from a specific artist, and headphones on the wall allow visitors to hear from the audience as they spectate. Much of the photography in the exhibit was made possible through Norman’s connection with Philly arts enthusiast Conrad Benner, whose Streets Dept blog celebrates street art around the city. Benner supported Norman’s oral history initiative, and many of his photos, which encompass both cell phone-grade or professional quality images, were adopted and edited for the exhibit.

Off the Wall’s audio recordings of the artists’ oral histories are courtesy of Norman himself, who approached Siegel and Fredrickson to explore the idea of an exhibition in August. Siegel and Fredrickson’s previously worked with Monument Lab, a public art and urban research project set up in Philadelphia’s City Hall that elicited ideas from Philadelphians for hypothetical city monuments. The endeavor was co-headed by former Haverford Postdoctoral Writing Fellow Paul Farber, who worked with Haverford faculty and library fellows to support the project’s programming. Given Siegel and Fredrickson’s experience with public art in Philly through Monument Lab, Norman saw overlaps in the trio’s work that questioned the role of power in public art.

“The goal of the project was to present a tangle of narratives about public art that would complicate visitor’s previous conceptions about how creative interventions like murals, street, and graffiti come into being and what these interventions intend do for the spaces they exist in and for the people who live in those spaces,” said Norman, an English major at Bryn Mawr with a concentration in peace, justice, and human rights. 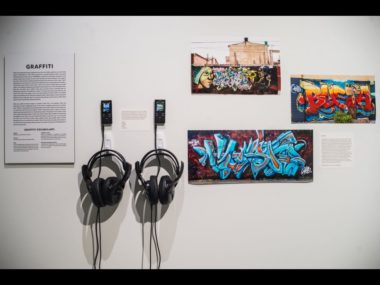 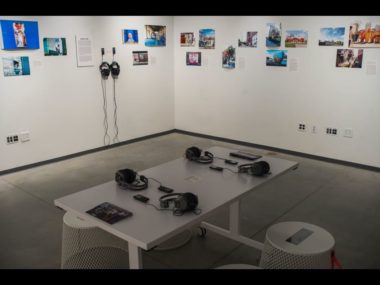 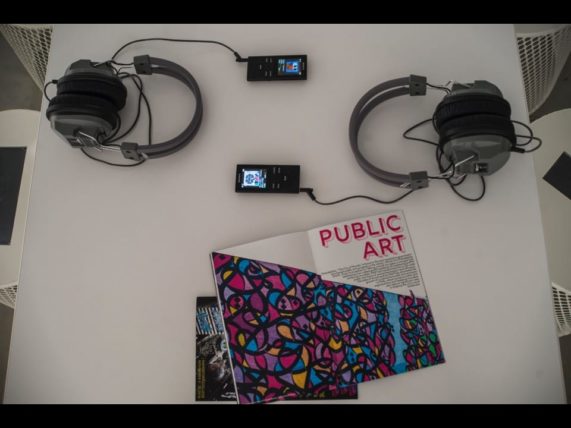 The exhibition presents three walls, which explore public art, graffiti, and street art. Each of the three students brought their own interests and skillsets to the work, with Siegel and Fredrickson both having experience working with a VCAM Create Space, and Norman having worked in oral history with Voice of Witness in summer 2017. Key to realizing the project were the former experiences, interests, and connections each curator brought to the collaboration.

“I was interested in Paper Monuments and Monument Lab because I’m very interested in the connection between built environment and city identity,” said Fredrickson, a growth and structures of cities major. “Monuments are a very clear cross section of those two things.”

The months leading up to the exhibition involved a lot of planning that saw the three collaborators figure out how to set up the create space, obtain permission from artists and apply for support from the CPGC, the Rufus M. Jones Fund, and the John B. Hurford ’60 Center for Arts and Humanities. The group praised the support of Courtney Carter ’17, this year’s postbac fellow at the Hurford Center who has helped get a variety of student projects into exhibition spaces.

“We could not have done it without Courtney,” said Siegel. “It was like a crash course on how to put an exhibition together.”

Though the exhibition closes on November 23, the group is interested in finding other mediums to showcase the stories shared by the Philadelphia artists. Just as important as giving artists a platform to tell their stories is finding an accessible outlet where those moved by the art can hear the stories behind it. With such an incredible nearby city with great art, the curators of Off the Wall hope that the interactive space will inspire visitors to appreciate Philadelphia and all of its wonders.