It has been a busy semester for the Lighted Fools, the Bi-Co’s improv/sketch comedy group. From auditions and callbacks in the first week of the semester to a road trip to New York to see and work with the Upright Citizens Brigade to their first show of the semester, the Fools have already had a packed semester… and it’s only March.

The longstanding group traditionally puts on two shows a semester, one in the middle and one at the end. These Friday and Saturday evening performances include a mix of a long-form improv, live original sketches, and a handful of video sketches. Their most recent show, “Babies R Us,” featured the debut for the troupe’s four new members: Ewan Lang ’21, Emma Castiblanco ’21, Grace Cavanaugh BMC ’21, and Gwen Vandivere BMC ’20. Despite a snow storm on opening night, the show went on.

“The most recent show was one of best yet,” said Claire Sargent ‘18, a member since spring 2015. “In the midst of a snowstorm, the prospect of performing was a little daunting. People were definitely nervous going into the show, but ultimately our insecurities and apprehensions were drowned out by really strong positive channeling of group energy, overall excitement, and the mentality of just going out there and having fun.”

“I’m also so proud of the babies [what the group calls their new members] on their debut,” said Grace Caterine BMC ’20. “They did excellently!”

The weekend prior to the show, the group headed to New York City for a two-day trip funded by Students’ Council. The first night, they saw a professional improv show at the Upright Citizens Brigade (UCB) theater in Hell’s Kitchen. They stayed the night at the home of Joe Denoon ’17, and then headed out early in the morning to go to two improv workshops with the UCB. This trip,  which has been happening for over a decade, has become a tradition for the Fools.

“Learning from and being critiqued by professional improvisers was such a helpful experience, and we’re hoping to apply the tips and tricks we learned from them to our practices and shows this semester,” said Brian Keller ‘18, one of the Fools’ leaders.

Formally recognized in 1991, Lighted Fools began as an avant-garde theater troupe performing Shakespearian soliloquies and short, original scenes (The group takes its name from the famous soliloquy from Act Five of Macbeth). Now the group focuses exclusively on improv and sketch comedy.

“Being in the Lighted Fools has been an absolutely wonderful part of my Haverford experience,” said Sargent, another of the senior leaders. “I’ve met people I know will be lifelong friends and I’ve learned innumerable things comedy and non-comedy related. I came into the group with absolutely no comedy experience, let alone improv. I now leave Haverford with skills I never could have learned in a classroom. My experiences have taught me how to be confident and how to make the best out of every situation—if a joke flops or a sketch doesn’t go according to plan, I couldn’t just give up. I learned to pick my head up and keep moving forward, making sure to support my peers and learn from my mistakes. I have loved going out in front of an audience with a group of friends to not only make the audience laugh, but have a great time doing so.” (Continued after the gallery.) 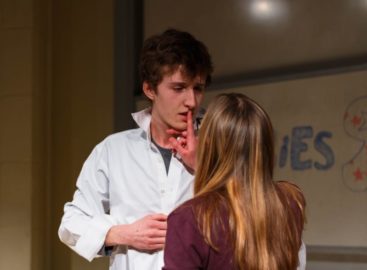 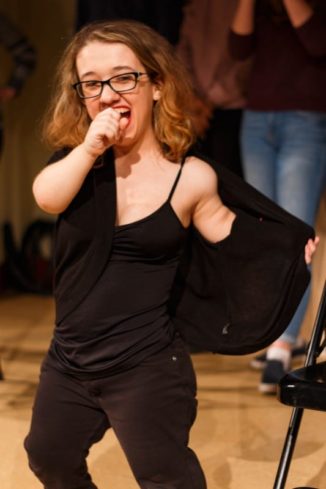 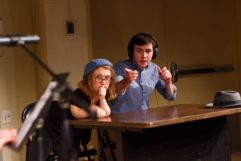 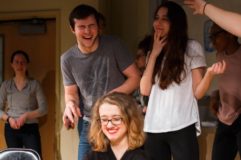 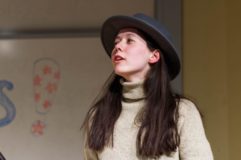 Katie Rodgers ’18 in a skit from the show.

The group has regular practice twice a week for two hours and, during this time, they employ different improv exercises and games, finishing every practice with a half-hour set.

Sargent is excited to enjoy her last semester with the group. She notes how as a mathematics major, the Fools are a great creative outlet. “Math is very structured and logical, and so Fools gives me the outlet to get creative and explore situations ‘illogically,'” she said. “The funny thing in a scene sometimes makes absolutely no sense, but if it’s funny, it’s funny.”

“I’ve gotten to meet new people and a crazy thing to think is I would likely have never have met most of the Fools without the group, because we all are different grade levels with different majors, and what a loss that would have been,” said Caterine. “It’s also kind of fun to build an audience. I was initially a nobody on both campuses, so to work towards getting more laughs has pushed me to be a more engaged and better performer, because I have no safety laugh!”

The Lighted Fools have a few more performances still to come this semester. The group is collaborating with two other comedy groups on campus, Off the Spot and the Throng, and applied through the Rufus M. Jones fund for budgeting to bring a Ice Cold Bev, a professional group to campus. This weekend, Off the Spot and the Lighted Fools are hosting a “sketch cram,” in which they’ll spend 10 hours writing togethr and preparing sketches that they will perform that night. There will also be a Throng/Fools show at Haverfest. Catch the group’s last show in their current iteration and say goodbye to the seniors May 11 and 12 in Sharpless Auditorium.

“There is a sense of community and camaraderie surrounding how much fun being in the Fools is, and how the Fools helped mold people into who they are today,” says Sargent, who will graduate on May 19. “This feeling was reiterated at the 25th reunion, which happened in fall 2016. Speaking with Fools of all generations was incredible. There were people from such different backgrounds who went on to do wildly different things, but who all shared this wonderful experience.”