“Activism can be a journey, rather than an arrival,” so went the frequent talking point of the recent Rights At The Edge symposium, which took place on campus November 2–4.

The purpose of the symposium was, in the words of organizer and Visiting Assistant Professor of Peace, Justice, and Human Rights Adam Rosenblatt, “pushing the ‘edges’ of the human rights framework” through an examination of “human rights pedagogy, refugees, species, race, disability, children, older persons, and the dead.” Rosenblatt hoped the topics of engagement would encourage audience members to consider rights in two ways: as pre-established protections held by the groups who are presumed to have them and as safeguards contingent upon how societies define what it means to be, or count as, a human being.

The schedule included academic talks, workshops on political advocacy, and the opening of Brian Palmer and Erin Hollaway Palmer’s exhibit of photographs from historic African American cemeteries in Virginia, All Our Sorrows Heal: Reclaiming the Past at East End and Evergreen Cemeteries, Richmond and Henrico County, Virginia, which will be up in Magill Library’s Sharpless Gallery through December 22.

Jolie Brakey ’19, Rosenblatt’s research assistant, provided a supporting role for the symposium. She described it as an opportunity to bring in “experts who have unconventional ways of looking at human rights.” The overall goal, she added, was to provide a look “at human rights, but through a different lens and through voices and ideas that haven’t been heard yet.”

A political science major with a concentration in Islamic and Middle Eastern studies at the College, Brakey began working with Rosenblatt her junior year. From her unique vantage point, she was inspired by her chance to build “professional relationships with some of the top scholars in the field.”

Rosenblatt and Brakey worked closely with the Center for Peace and Global Citizenship (CPGC) throughout symposium. The Center invited three of the speakers, and a few of the symposium’s programs started out as CPGC initiatives. (Continued after the gallery.) 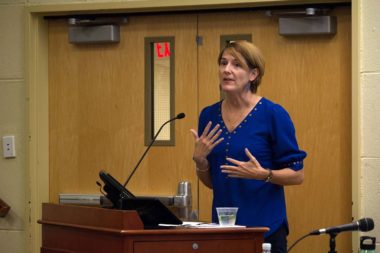 Maureen O’Connell is an associate professor of Christian ethics at La Salle University and an active member of POWER (Philadelphia Organizing to Witness, Empower, and Rebuild).

The first panelist, Diya Abdo, is an associate professor of English at Guilford College. 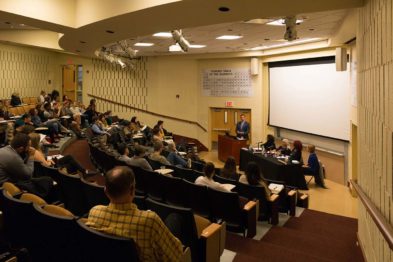 The panel “Human Rights Pedagogy and Practice” was part of the Peace, Justice, and Human Rights and CPGC’s Rights at the Edge symposium. 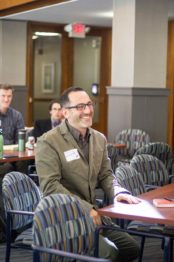 Organizer Adam Rosenblatt at the symposium. 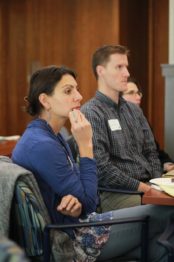 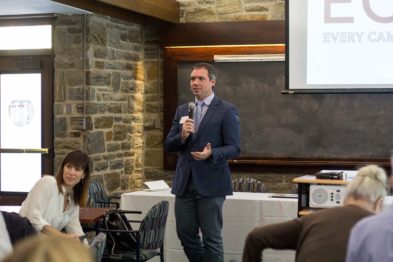 Rosenblatt organized the symposium around what he described as “four edges” of human rights work. The first edge refers to “where our current human rights framework meets the institutions, policies, and enforcement mechanisms” for those rights protected under law, he said.

This was first addressed by Diya Abdo, associate professor of English at Guilford College, who spoke about “Every Campus a Refuge,” a program that mobilizes the resources of college campuses to host refugees and help them access services. Later, Angela Naimou (of Clemson University), Amanda Levinson (co-founder of NeedsList), and Arancha Garcia del Soto (of Fordham University) offered additional perspectives on how refugees are imagined as people versus as a category and how their voices can be better amplified. Bethany Barratt (of Roosevelt College) discussed older persons as a global category of rights subjects, while Haverford Associate Professor of Peace, Justice, and Human Rights Jill Stauffer referenced how child soldiers are making us rethink the concept of criminal responsibility.

Rosenblatt’s second edge is “wherever the boundaries of the ‘human’ in ‘human rights’ are drawn.” This tied together talks by Haverford Visiting Assistant Professor Kristin Lindgren, whose addressed how disability can be used as a way of excluding some from the benefits of humanity, Tom Donahue (of Haverford’s Department of Political Science) who discussed the possibility of nonhuman animals as deserving rights, and Claire Jean Kim (from UC Irvine) who described how race and species have historically been in dialogue with one another, and even conflated, as ways of marking some beings as excluded from ethical concern. Finally, Osman Balkan (of Swarthmore College), Isaias Rojas-Perez (of Rutgers-Newark), and the journalist/activists Brian Palmer and Erin Hollaway Palmer led a panel on the rights of the dead and the right to mourn.

“The third edge of this symposium,” said Rosenblatt, “sheds light on the one that exists between the university and its surroundings.” This was explored further in talks by Abdo, Maureen O’Connell (of LaSalle University), Bethany Barratt, and Haverford Assistant Professor of Anthropology Juli Grigsby, who spoke of their own experiences, the concept of “communiversity,” and the different ways in which colleges can approach this goal of breaking down barriers between universities and their surrounding areas.

The final edge was identified as situated between all of the different disciplines that had come together for this symposium. Oriented towards the ways in which we can make “activism a journey,” the symposium concluded on November 4, with del Soto’s workshop, Solidarity and Real: Stereotyping Radicals and Refugees in Times of Confusion, which allowed participants to become familiar with refugee work and its policy implications.

The Rights at the Edge Symposium was sponsored by the concentration in peace, justice, and human rights, the CPGC, the John B. Hurford ’60 Center for the Arts and Humanities, the Office of the Provost, the Distinguished Visitors Fund, and the Ethical Leadership Program Fund.