Haverford’s Yiddish Culture Festival, an on-going campus celebration of Yiddish film, music, literature, and more, often invites musicians to play or speak about their Yiddish music during the events it hosts each semester. But Koyt Far Dayn Fardakht were unlike any band who had been a part of the festival before.

On Nov. 8, in Chase Auditorium, the New York-based, Yiddish punks (whose name translates to “the Filth of Your Suspicion”) spoke on a panel about their journeys to performing in Yiddish, the process by which they seek out and adapt archival Yiddish music into new songs, and their experiences working in the Yiddish performance world as queer and transgender women. (They also gave a concert in Philadelphia the following night.) Band members Yonah Adelman, Rosza Daniel Lang/Levistky, and Rose Kaplan-Bomberg ‘10  (there is a fourth member who couldn’t attend) handed out zines that had their song lyrics in it—in Yiddish, English, and the phonetic pronunciation of the Yiddish—so that the audience could follow along.

Bassist Kaplan-Bomberg ‘10, who during her time at Haverford majored in art history at Bryn Mawr and was part of student-run concert-planners FUCS, reached out to Senior Lecturer in Mathematics and Statistics Jeffrey Tecosky-Feldman, who organizes the Yiddish Culture Festival, about bringing her band back to her alma mater. (Continued after the gallery.) 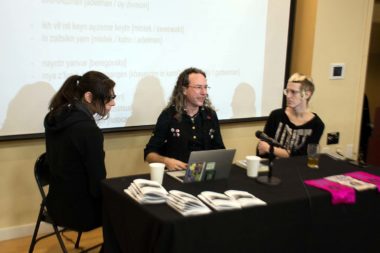 “We wanted to honor the achievement of Yiddish culture in this country,” said Gillis, who was on hand for Koyt Far Dayn Fardakht’s talk. “This is the first time we’ve had a panel like this, and I’ve found it fascinating.”

The band played different clips of their traditional source music alongside clips of their own versions of the songs, and they spoke of how they came together as a band and how each individual came to the Yiddish language.

“This particular event was really interesting,” said Tecosky-Feldman. “This is a slice of contemporary culture that is happening in New York City that we don’t see in Philadelphia. A punk rock band playing old Yiddish poems and tunes—it’s just kind of amazing. I’m thrilled to be able to support this and really listen to the story of how these folks came to this music and this poetry.”

The Yiddish Culture Festival is always free and open to the public—in fact, says Tecosky-Feldman, most of the 30 to 40 attendees at each event are usually drawn from the local community off campus.  It is not necessary to speak or understand Yiddish to fully enjoy these events. So far this semester, the festival has hosted a screening of The Jester & Der Purimspiler and an “Israel in Yiddish” poetry talk. The last event of this semester is a screening of the film The Cantor’s Son & Dem Khazns Zundyl from 1937, which will be held on Wednesday, Dec. 6, at 7:30 p.m. in Chase Auditorium.