On Oct. 10, Magill Library hosted the opening reception and curator talk for Where is the Penn Treaty Elm?, an exhibit that examines the historical background and veracity of a romanticized notion from Pennsylvania’s history.

Though historians may debate the authenticity of the 1683 treaty between the Lenni-Lenape and William Penn, the location where the meeting was alleged to have taken place—under a great elm tree on the banks of Shackamaxon, modern-day Penn Treaty Park in Fishtown—has nonetheless come to serve as a traditional American story about the founding of Pennsylvania. This new library exhibition, which was born out of the spring 2017 “Introduction to Public History” course, examines the myth, using the heritage of the great elm tree and its relics as symbols of original American convictions toward the treaty. Co-curated by Paul M. Farber, who taught the course last spring, and Eleanor Morgan ’20, with contributions from the rest of the students in the class, the exhibition will run through Dec. 1.

At the opening, Farber, now the managing director of the Penn Program in the Environmental Humanities, recalled a childhood growing up in and around the Wissahickon Valley Park, which sparked his interest in the nature of the relationship between the Lenni-Lenape and the early Quakers whose land they inhabited. Questions such as, “How does one ‘found’ a city on land already inhabited by Indigenous communities?”solidified Farber and Morgan’s decision to revisit such a romanticized historical event and are embedded the exhibition.

These included scions, descendants from the original Ulmus americanus tree under which the alleged treaty took place—at least one of which resides on the Haverford campus— and relics created from the wood of the elm which fell during a storm in 1810. It was many of these purported relics from the original elm that were present at the opening reception and remain accessible all visitors of the exhibition.

Every student in “Introduction to Public History” contributed their own research to the exhibit, and Farber mentioned that his students’ input was “essential in shaping the early strategies and later tactics of display, [and] I am grateful for their collaborative and creative approaches.”

“I really liked how we were able to put the skills we learned in class through our readings and class discussions to use in researching the Penn Treaty Elm for the exhibition” said Ariel Censor ’20. “In class, we learned a lot about how history can be dramatically warped through who is telling it and how it is told. In doing our research and writing the commentary that eventually went into the exhibition booklet, we tried our best to use what we had learned in class to consciously include objects and narratives from different voices then we typically hear when discussing William Penn and his treaty with the Lenape”.

“Today, the treaty is remembered as a symbol of peace and love” and survives throughout the Greater Philadelphia area through a variety of symbolic mediums which link “the past, present, and future of the city,” the student-creators explain in the exhibition booklet.

“I chose all the pieces,” said Morgan, who got involved with Farber’s course and early plans on the exhibition through the Joseph E. O’Donnell Research Internship. “Seventy-five percent of the items are from Haverford Special Collection, the rest were a collection from a variety of sources”.

Morgan, who had previously worked at the Yale University Art Gallery, found that this library exhibit helped her realize a passion and cemented her desire to major in art history. “[I found myself] more interested in the education aspect of art history,” she said, “using art as education rather than just the curation aspect.” 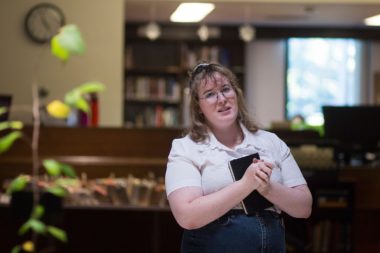 Eleanor Morgan ’20 speaks at the opening.

Paul Farber gave a talk at the opening. 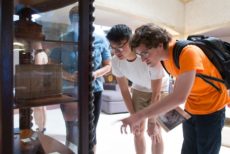 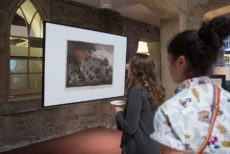