Members of the community gathered for two nights of autumnal festivities sponsored by the Haverford College Arboretum. The first night featured pumpkin carving and the next was a night hike lit by the jack o’ lanterns made the day before.

“We got 135 pumpkins and some people brought their own as well,” said Daniel Larkins, the new Arboretum program coordinator who organized these inaugural events. ” I’m happy so many people came out and were having a lot of fun. I was excited to get my hands dirty and start carving.”

Two rooms in the Facilities Building were set up with tables, carving tools, and dozens of pumpkins. Hot cider brewed and maple donuts were set out. People worked next to one another and together, admiring each other’s work. The pumpkins competed in three major categories on the winners were Mao Wang for “funniest,” Michael Talone for “most unique,” and Andi Wasikzuk for “most artistic.”

For Megan Tedford ’21, the pumpkin-carving party was the first arboretum event she had ever attended. “This is a really nice study break. It’s nice to get into the spirit for Halloween,” she said.

Georgie Davidis, who works in the Provost Office, was glad to undertake a new experience.

“I have never before carved a pumpkin, so this is my first time,” she said. “It sounded like a lot of fun and so far it is.”

“I think for international students, like myself, this might be their first time celebrating Halloween,” said Miao Wang BMC ’21. “It’s a fun introduction to another part of American culture.”

The following evening, all the handiwork of the pumpkin-carvers lit the way of the 2.2-mile Nature Trail for the College’s first-ever Night Hike. The trail was established in 1933 and has since been used by students, faculty, staff, and outside community members. The Skate House, located next to the Duck Pond, was used as the central hub for the event. People arrived at the Skate House, met their tour guide, walked the lantern-lit trail, and then return to the Skate House for a log fire, s’mores, cider, and singing.

“I’m here for fun and I’m here to sing,” said Melissa McLaughlin. ’19 “We have a copy of Rise Up Singing. Before this, I walked the Nature Trail. The pumpkins were beautiful.”

“You know an event has really come out well when the people volunteering are having as much fun as the people they are serving.” said Russell Nicholson ’18, who was staffing the event as part of his work for the Arboretum.

“The goal of the night hike and pumpkin carving was to bring the community together and to the Haverford College Arboretum for a fun, safe night suited for all ages,” said Larkins. “I wanted to show people the campus at a different time of day. It has a different look at night. … Everyone is having a lot of fun and it’s great to see. I really appreciate all the people coming. We had wonderful support from all our student and community volunteers.” 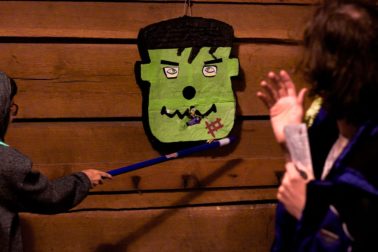 Games in the Skate House

Some of the carved pumpkins.

Games in the Skate House during the Night Hike. 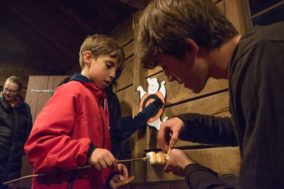 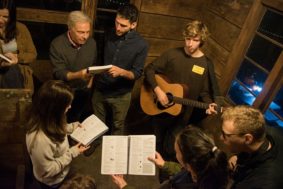 A sing-a-long in the Skate House