The Chesick Scholars Program, a four-year academic mentoring and leadership program at Haverford for talented students with recognized potential from underrepresented or under-resourced backgrounds, celebrated a milestone last May when its first class of scholars graduated from the College. The program, which was started in 2012 after nearly a decade in the making, responded to faculty and staff desire to create a context where every academically qualified student admitted to Haverford, regardless of background, could truly thrive. Thanks to the generosity of an anonymous donor and the San Francisco Foundation, such a program was begun in honor of the late Haverford chemistry professor John P. Chesick.

This year, 14 members of the Class of 2017 are Chesick Scholars, and on May 10, a special dinner honored them, their achievements at Haverford, and the program’s donors. Vice President of Institutional Advancement Ann Figeuredo ’84 opened the event, speaking in both English and Spanish, giving the history of the program and describing the wide-ranging talents and accomplishments of this year’s graduating scholars. She noted that they hail from all across the country—from California to Puerto Rico and points in between—and majored across the spectrum of disciplines at the College (biology, chemistry, English, history, mathematics, philosophy, political science, and psychology). Three are recipients of College Honors. Two are Mellon Mays Undergraduate Fellows. Seven studied abroad during their junior years, and three hold campus leadership positions.

Figueredo also mentioned how pleased the donor was by the success of the students and the program. “The program has exceeded [the donor’s] expectations and, in his words, has been the most fulfilling philanthropic experience he has ever had,” she said. “And that is thanks to you—your dedication, your diligence and your resulting achievements.”

Inspired by the accomplishments of the scholars, other donors have stepped forward to contribute to the Chesick Scholars Program, including Bill Macan ’64 and John Chesick’s widow Linda Gerstein, who were both in attendance on Wednesday night.

After brief remarks from Provost Fran Blase, Director of the Office of Academic Resources Kelly Wilcox, and Director of the Multicultural Scholars Program and Senior Lecturer in Mathematics Jeff Tecosky-Feldman, three of this year’s graduating scholars spoke about their experiences with the program and at Haverford: Gabe Delabra ’17, who has secured a job as a litigation legal assistant at Sullivan & Cromwell in Manhattan and who hopes to eventually go to law school; Alexa Herlands ’17, who is entering a master’s of theological studies program at Harvard Divinity School; and Shakira King ’17, an aspiring cardiologist who will spend next year as a clinical research coordinator at the University of Pennsylvania.

The inspirational evening ended with Figueredo reading a statement to the graduates from the donor. It read: “That you stand here today is testament to your courage, your dedication, of course your talents and likely your sense of humor. Your presence has educated and changed the perspectives of fellow students, teachers and administrators in the Haverford community. As you go forward in your undoubtedly successful march through life, hopefully you will take the central tenet of the Honor Code with you, an obligatory commitment to your community, and you will offer the Chesick principle of sustained help to change the life of one, or many.” 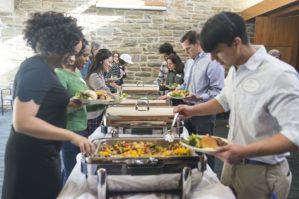 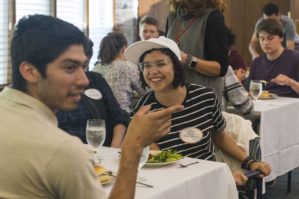 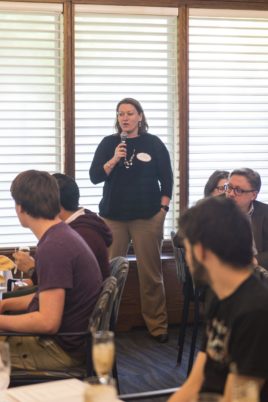 Director of the Office of Academic Resources Kelly Wilcox 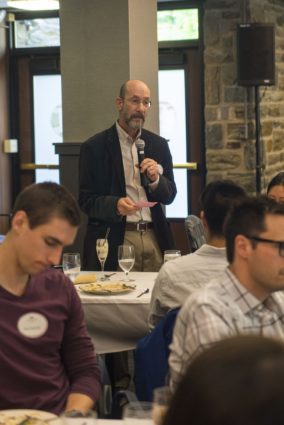 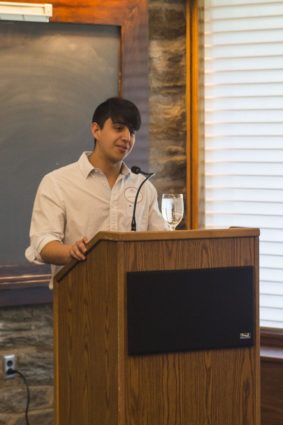 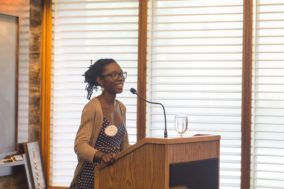 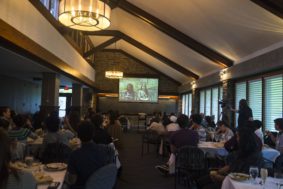 A video, featuring scholar interviews from both the summer 2013 and this year, allowed the scholars to reflect on their college experience.