Overlooking the public gardens and colorful buildings along Venice’s grand canal around sunset, the members of Quartetto di Venezia, or the Venice Quartet, danced their bows across their strings, bringing compositions by Haverford’s Ruth Marshall Magill Professor of Music Curt Cacioppo to life. That performance was three months ago. But last Thursday, Haverford community members were treated to the next best thing. “A Flowering of Art and Music” transported Magill Library’s Phillips Wing to Venice by displaying the Italian-inspired artwork of Fine Arts Professor Ying Li accompanied by a live performance by the Venice Quartet of works composed by Cacioppo.

The event, which featured seven of Li’s paintings and four of Cacioppo’s compositions, is the second such display this academic year showcasing the collaboration of Li and Cacioppo. The two last presented their mutually inspired works at last September’s U.S. premiere of Cacioppo’s Synaesthesis I, a sonata inspired by Li’s artwork, which surrounded the crowd of listeners during her Geographies exhibition in the Sharpless Gallery. This time, though, the two wanted to share a more casual display of their work inspired by their time in Italy.

“It’s not a formal thing. It’s an interactive occasion,” explained Cacioppo, who hoped to facilitate an opportunity at which people could show up in “street clothes,” talk with the two artists about their works, and enjoy a taste of Italian-inspired art.

“This event is really a result of our love to Italy,” said Li. “That place just really brings out all the beauty, the humanity… You really get your creative juices going when you’re there.” (Continued below the gallery.) 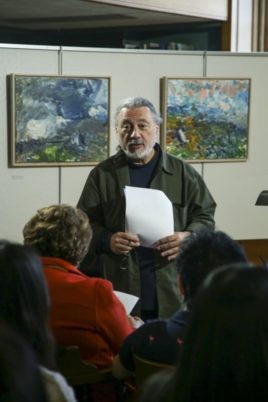 Professor Curt Cacioppo talks about his experiences in Italy. 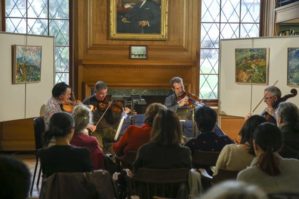 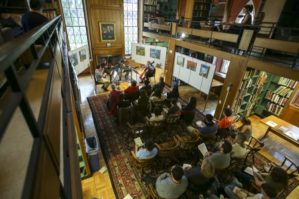 Li’s paintings were created while she was teaching in Umbria over the course of eight summers. Her Italian-inspired palette meshed with the sounds of Cacioppo’s compositions, each inspired by a different region of Italy. “Venezia Mia,” or “My Venice,” paid homage to the flowing progression of a gondola ride on the city’s canals. “Italian Holiday” contained three pieces that each captured a different particular Italian local. One, inspired by the city of Catania, was dedicated to Li. When Cacioppo was eating lunch on a patio in the Sicilian city, he admired the baroque buildings and mild sky and thought, “Ying should be here. She should be here painting this.”

Instead, he painted in in music. As was the case with Synaesthesis I, the essence of Li and Cacioppo’s work is their interplay of sound and visuals, bred from decades of mutual admiration for one another’s art. This time around, the sense-engaging offering functioned to bring a slice of their favorite place back to the community they love.

The Quartet itself helped create the mood, of course. Though Cacioppo was troubled by the grueling process of obtaining visas for the performers, he was grateful for the help of Provost Fran Blase and Librarian of the College Terry Snyder,who insisted that the event happen. The Quartet, for their part, expressed their thanks with a surprise composition of their own dedicated to Blase and Snyder.

As Magill Library is scheduled to undergo renovations next year, Cacioppo and Li were glad to utilize the historic Phillips Wing before the project commences. With their art, they were able to adorn it with ample Italian flair.

After witnessing their collaboration, it’s easy to understand why.