When Haverford’s Dean and Director of the Office of Multicultural Affairs Theresa Tensuan was in college and in graduate school ’80s and ’90s, she read cartoonist Lynda Barry’s alt. weekly comic strip, Ernie Pook’s Comeek, religiously, following the adventures of the comic’s young female protagonist, Marlys, with great delight. The cartoons’ humorous, realistic narratives marked Tensuan’s transition into adulthood, and first opened her eyes to Barry’s talent and creativity.

Tensuan’s lifelong admiration for Barry led her to incorporate comics and graphic narratives into her own work, and to rethink her role as an educator in the classroom setting. “Lynda Barry unearths stories that we often don’t tell, and has a compelling way of teaching about her writing,” she said. Inspired by Barry’s writing techniques and philosophy, Tensuan established a friendly correspondence with Barry, and invited her to give writing workshops with students on campus in 2003 and later in 2009.

Tensuan once again welcomed the author to Haverford Thursday night to speak about her career, storytelling, and the role that the visual plays in her pedagogical approaches. Barry’s talk, which was accompanied by an elaborate, highly entertaining visual presentation, attracted a wide audience of students, faculty, children and members of the public community.  (Continued after the gallery.) 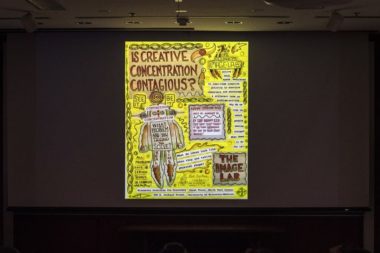 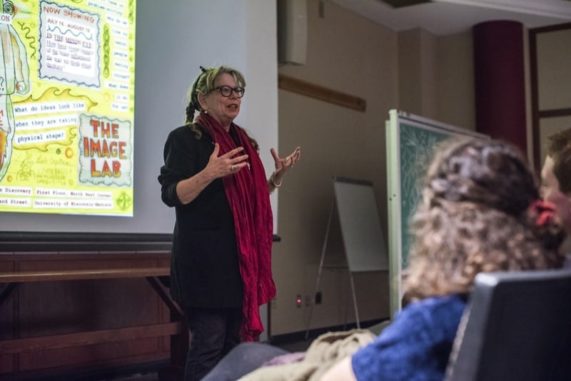 Barry, for those who are new to her acclaimed work, is the author of 21 books, including the novel The Good Times Are Killing Me, which was adapted into a long-running off-Broadway play, and the novel Cruddy, which has been translated into French, Italian, German, Catalan, and Hebrew. The frequent guest on The Late Show With David Letterman has been an NPR commentator and had regular monthly features in Esquire, Mother Jones, Mademoiselle, and Salon. Her “Writing the Unthinkable” workshop—designed for non-writers—was the subject of a New York Times Magazine article and is the basis for her award-winning book What It Is. Currently she holds the posts of associate professor in interdisciplinary creativity, director of the Image Lab at the Wisconsin Institutes for Discovery, and the Chazen Family Distinguished Chair in Art at the University of Wisconsin-Madison.

At Haverford, Barry introduced herself as the loudest kid in her neighborhood by way of announcing that she assumed that everyone in the audience could hear her without a microphone. She then proceeded to sing a brief autobiographical song, which shed light on her childhood. She explained that she was raised by her Filipino grandmother, who first introduced her to the art of storytelling, and later attended Evergreen State College, where, upon passing a note with a scribble on it to a classmate, she found out that her drawings had the power to make people laugh.

Barry’s interest in drawing led her to model for her college’s life drawing classes. During one of these classes, the professor, Marilyn Frasca (who is still a good friend), posed the question “What is an image?” prompting the fascination that would come to define Barry’s career. “Images are the soul’s immune system and transit system,” she told the crowd in Sharpless Auditorium on Thursday night. “They’re used to stand [for] and to understand reality.” Barry explained that images are contained in everything: a toy can contain an image that carries a toddler’s sense of wellbeing, while a book can represent a world of images the reader never wants to end.

Barry became particularly intrigued by the image of the hand—its abilities, its symbology in different religions and its importance in child development—and consequently became fascinated with handwriting. “I began to write with a paintbrush,” Barry stated about the beginning of her career as a cartoonist. She emphasized that it is not important how well-drawn or how well-written an image is: the idea it represents is what matters. For this reason, she has an especially deep appreciation for the artwork of the young children she works with, whose drawings she presented in a slideshow to the audience. This artwork includes that of children who have lived through atrocities; for child soldiers and children who have witnessed genocide and war drawing becomes living testimony.

“Children’s drawings are like scientists’ drawings,” said Barry, pointing to remarkably similar illustrations made by kindergarteners and NASA officials. “All people draw the same way when they get an idea.” Her pedagogical work, she said, involves having children work together with graduate students on their dissertations. “The grad students are able to borrow a state of mind of someone for whom discovery is part of everyday life” she said.

Barry’s talk, which at many points had the audience roaring with laughter, fully conveyed her charisma, humor, and creativity. Many were even able to interact one-on-one with the inspiring illustrator during her post-talk book-signing and the pedagogy workshop with faculty and staff that she held the following day.