The final event of Cantor Fitzgerald Gallery’s Bring Your Own Body: transgender between archives and aesthetics was a recent conversation with filmmakers Reina Gossett and Sasha Wortzel and an exclusive screening of parts of their upcoming film Happy Birthday, Marsha!. That film tells the story of artist and activist who helped ignite the Stonewall Riots of 1969 in New York City.

Happy Birthday, Marsha! is currently in post-production, and the robust crowd that filled Chase Auditorium last Monday featured students, faculty, and Philadelphia-area visitors who were eager to preview the much anticipated movie. The artists, after introducing their work and giving some background on Johnson’s life, presented a collage of media that featured clips from the film as well as other videos that inspired their work. The evening proved to be a unique opportunity for those in attendance to take a behind-the-scenes look at an influential work of art and hear from its creators.

“Mostly we just want to look at things together,” said Wortzel, the director of access and community programs at the Whitney Museum of American Art, of the evening’s agenda. The screening was not a display of the film’s plot, but of its “mood,” Gossett explained.

“The trailer, for us, is really moody,” she said. “The score is really important to us, [that it convey] the sounds and feels of the hapticality of Marsha P. Johnson.”

The artists stressed the importance of the film’s tone and spirit, which was deliberately conceived not to be a documentary based on archival material, but rather a creative project. “We thought it was actually pretty important for us to share their stories in ways that were imaginative,” said Gossett. The film itself was never intended to be a definitive record of Johnson or those around her, but one interpretation of a story that is often pushed aside or erased. Gossett, who, like Marsha, is a black trans woman with a background in community organizing and activism, hopes that film will address this historical erasure and begin to answer the question, “Who were the people who came before me?” 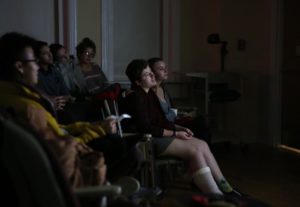 The audience watch selections of the movie “Happy Birthday Marsha!” in the Chase Auditorium on Monday, December 5, 2016. 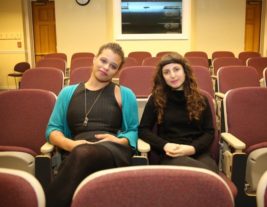 Filmmakers Sasha Wortzel and Reina Gossett after the screening.

Bring Your Own Body, which closes Dec. 11, is a showcase for the work of transgender artists and archives and, therefore, is similarly interested in such questions.  That’s why the curators wanted it to be its last related events. Co-curator and Visiting Assistant Professor Jeanne Vaccaro noted that Happy Birthday, Marsha! closed the exhibit by “embarking on a speculative journey, a creative journey rather than ending the show with some kind of final idea of a set, prescriptive way of thinking about transgender art and archives.”

Vaccaro was happy that the events over the past several weeks have helped to “activate” the exhibit and connect the campus with a greater community of Philadelphia-based artists, scholars, and activists. James Weissinger, associate director of the John B. Hurford ’60 Center for the Arts and Humanities, was similarly satisfaction that the exhibition transcended the walls of the gallery.

“When the Hurford Center was asked to take charge of the Cantor Fitzgerald Gallery…t he hypothetical dream was to have exhibits that happen in the gallery that also are a course,” said Weissinger. Bring Your Own Body, which is also the name of the class that Vacaro taught this semester, “is one of the first [shows] where we’ve really been able to do that,” Weissinger said. “And it’s radiated out with all this wonderful programming that’s been in Philly and bringing artists down from New York, and archives, and a bunch of other places.”

In the Fall of 2017, Haverford will open its new Visual Culture, Arts, and Media (VCAM) facility in the renovated Old Gymn. And Weissinger hopes that the space will help facilitate more opportunities for artists to come and share works in progress, as Gossett and Wortzel have.