Economics majors and other members of the Haverford community filled Sharpless Auditorium on Wednesday night for the economics department’s annual alumni forum, “The Economics of Crime and Incarceration.” Mark Kleiman ’72, professor of public policy at NYU’s Marron Institute of Urban Management, and Eric Sterling ’73, executive director of the Criminal Justice Policy Foundation, were the invited speakers in a discussion moderated by Brie Groh ’15.

Anne Preston, chair of the department, opened the event by explaining the context of the panel on the eve of a general election. While this was the third economics alumni panel to take place during a presidential race, it was the first in which the topic was not the economic ramifications of the different candidates’ proposed policies.

“This year we decided we would look at the economics of crime and incarceration because we think it’s such an important issue in the current election,” said Preston. “Certainly with the Black Lives Matter movement, the concern about police violence against young black men, and the escalating domestic terrorism, it sort of crops up on the campaign trail every day.” 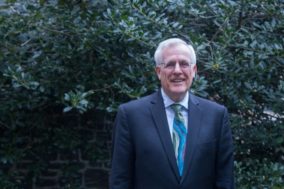 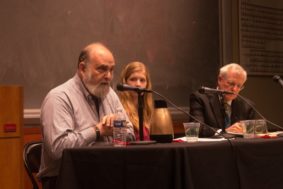 “In my Economics Senior Seminar [taught by the late Holland “Ho” Hunter]… the question kept arising: ‘This is lovely theory, but does it even matter in the real world?’” said Kleiman. “So, I thought tonight I would explain to you one way economics matters in the real world, especially when you get it wrong.”

Kleiman went into detail about a history of, in his view, misguided research that influenced U.S. crime policy since the 1970s. The misconception, he explained, was that if the cost of committing a crime was higher than the reward for committing it, crime rates would go down. He connected this notion to abnormally high rates of incarceration and recidivism in the U.S.

“I had a colleague in the Drug Czar’s office in Washington who was once asked at a big forum, ‘Can research influence drug policy?’ And his answer was, ‘Yes, especially bad research.'”

Both Kleiman and Sterling stressed the importance of research in their talks in front of an audience of young students and scholars. Sterling focused on the inadequacy of research surrounding the costs associated with current domestic crime policies.

“There are all kinds of economic consequences that flow out of the presence of [a] drug market,” he explained, contending that the prohibition of drugs creates the presence of open-air drug markets that drive down prices of surrounding land and deter business growth. His repeated message was to urge the young minds in the audience to undertake the research necessary to pressure lawmakers to consider the effects of costly drug policies.

“My charge to you,” concluded Sterling, “is that this is: I believe, a rich area for some great research where you can get a great reputation dealing with some very, very important issues that would affect the lives of every investor, of every worker in America.”

Watch a video of the full panel discussion.