On Wednesday night, normally quiet Magill Library was electrified with the sound of piano emanating from Sharpless Gallery. Curt Cacioppo, Ruth Marshall Magill Professor of Music, unveiled the U.S. premiere of Synaesthesis I, a sonata composed by Cacioppo and inspired by the work of Haverford Professor of Fine Arts Ying Li.

Students and faculty alike flocked to the crowded gallery, which is currently showcasing part of Geographies, an exhibition (also on view in the campus’ Cantor Fitzgerald Gallery) surveying Li’s paintings and drawings from the past four years. The exhibit has been running since early September, and continues through Oct. 7.

The concert commenced with 12 of Cacioppo’s piano compositions, some of which, such as “Parisian Room Waltz” and “Paean” were given their world premieres. Following the Cacioppo’s concert, three digital media projects were displayed. First was Reflections of Flames on Wet Pavement, a 2008 project with video choreography by Alexej Steinhardt ’99. It featured images from Li’s “Wuji (Infinity)” accompanied by recorded audio of the string quartet Impressioni venexiane or Impressions of Venice by Cacioppo. The following 2012 project was Sorriso a Catania, which mixed of Li’s artwork, Cacioppo’s photos, and string music from Cacioppo’s Divertimenti in Italia.

Finally, Cacioppo once again sat at the piano bench, unveiling Synaesthesis I alongside a video of close-ups of Li’s newer paintings, which are three-dimensional with thick paint. Though the event featured a brand new collaboration between the two artists, their relationship is the product of almost two decades of mutual growth.

“We’ve been able… to track each other’s development,” explains Cacioppo. “It started out… doing things like Customs [Week] workshops on what it is to be a creative artist, and gradually [evolved into] bringing our students together. Then, when I started producing more CDs, Ying was right there… she produced so many covers for CDs.”

Indeed, the pair’s newest project is rooted in years of understanding of and admiration for each other’s work, which each artist feels is an integral part of their collaboration.

“I love Curt’s music. I love that there’s this sense of rich, rich history in the foundation behind it, but at the same time all different kinds of stuff kicks in,” says Li. “It makes it very unique. It’s so many layers of readings there, and that’s how I wish my own work would be.”

Just as Li is able to identify “layers” in Cacioppo’s work, he too took note of the fine details found in the multitude of colors and shapes within Li’s most recent paintings.

“I was fascinated by how her art had taken on a three-dimensional quality,” he says. “The painting itself is a landscape of material… you go up to it and you see all these forms in the canyons and valleys and arroyos and spiraling conical things. What I wanted was to travel inside these shapes.”

That’s where filmmaker John Thornton came in. He was previously worked with the Haverford duo when he provided his videography skills for Sorriso a Catania, taking viewers inside the multi-colored landscape that Li created. Li remembers Cacioppo telling Thornton to shoot closer and slower as he filmed the details of the still wet paintings. The effect, says Cacioppo, is that “you become the painting.” 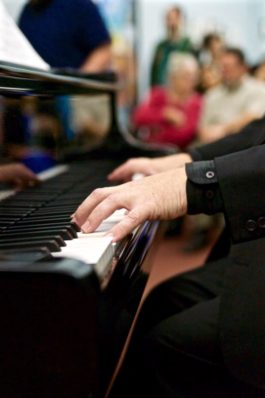 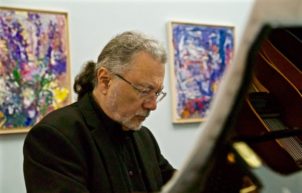 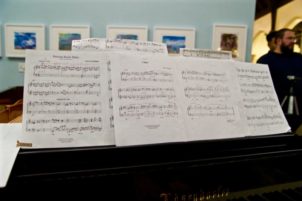 Some of the music

Throughout the entire show, the audience was enthralled as they watched the dynamism of Cacioppo’s performance, which at time featured him slamming down keys or reaching into the piano and strumming the strings themselves, all while being surrounded by the extensive body of Li’s vibrant work that lined the gallery’s walls.

“How lucky are our students?” proclaimed Terry Snyder, librarian of the College.

Though Li’s art will soon move out of the Sharpless Gallery, new exhibits will move in, includingConsent to Be Seen: Portraits by Riva Lehrer, curated by Courtney Carter ’17 and Writing Center Director Kristin Lindgren, as well as an exhibit focused on the history of astronomy, curated by Victor Medina del Toro ’17. Two additional student-curated exhibits will occupy the gallery next year, according to Snyder.

And Li and Cacioppo hinted at more collaborations to come: “Mystery City,” one of Li’s newest paintings on display in the Sharpless Gallery, was referred to by Cacioppo as “Synaesthesis II,” as it was created in response to a collection of composed work that Cacioppo gave to Li as an anonymous CD.

“We want to keep this going,” said Cacioppo.