Last weekend, for the first time since school started, the basement of Lunt Hall was packed with student-concertgoers eager to spend their Friday night taking in new music. The student-led Federation United Concert Series (FUCS) welcomed musician, songwriter, and visual artist Adam Green to campus alongside the punk rock band Priests for an unusual, but well-received start to the live-music scene at  Haverford.

As FUCS approaches the 15-year anniversary of its founding, the group is going strong, fostering steady attendance at near-weekly shows. Those shows are often advertised by large, colorful posters and a boisterous crowd of group members who remind students walking into the Dining Center on Friday evenings, “FUCS show tonight!” Thanks to a devoted group of student organizers and a steady appetite for live music on campus, FUCS has established a prominent role in Haverford’s social scene.

“A lot of the time… it’s just a fun, communal event with a lot of people dancing and having a good time,” describes Simon Balukonis ’19, who was one of two student members who organized this year’s first show.

Friday’s event was, at surface level, certainly an unusual way to kick off the year. Adam Green has released an array of ecclectic, folk-influenced albums since the late ’90s both as part of the band the Moldy Peaches and as a solo artist. In the past decade, he has also produced a variety of art exhibitions that incorporate sculpture, painting, collage, and paper maché. Recently, he started making films too, and on his current tour his visual art cannot be divorced from his music. The FUCS show kicked off with a screening of his most recent film, an offbeat reinterpretation of Aladdin, and continued with a musical set drawn mostly from his latest album (also called Aladdin). He also set up his own handmade paper maché stage decorations that drew stylistically from his movie sets, adding vibrancy to the black backdrop of Lunt Basement. (More below.) 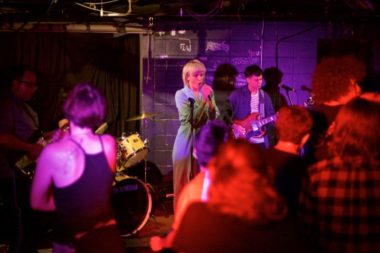 Priests performs at a FUCS concert in Lunt Basement. 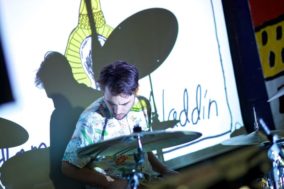 Adam Green performed music from his most recent album, Aladdin. 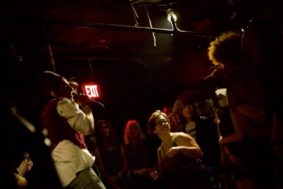 Priests, who were originally slated to be the solo headliners of the show, took the stage after Green’s set. Described as an “anything but right-wing” punk band by Balukonis, the band has been at the forefront of a recent renewal of  the punk scene in Washington, D.C., which first gained prominence in the 1980s with bands like Minor Threat and Bad Brains. Though FUCS shows usually showcase a headlining act complemented by one or two related artists, this evening’s two acts made for a surprising and offbeat pairing.

“It was a scheduling problem, actually” explains Balukonis. While fellow FUCS member Cordelia Larsen BMC ’17 had originally planned to host Adam Green during Labor Day weekend, the holiday closed certain venues in the area, which pushed back the schedule of Green’s tour, and led him to collide with Priests, who Balukonis had already booked for last Friday. “It was just kind of a happy accident…[you] get two acts that are fairly representative of what we bring here, even if they are fairly different,” says Balukonis.

As well as bringing in a diversity of acts to campus, FUCS tends to have an effect of bringing a variety of people together in one space on campus.

“It’s nice to have the focus of a party be music,” says Larsen, who explained that FUCS shows give people a space to unwind on weekends without the obligation to navigate typical party spaces. “If you don’t necessarily really want to interact with people, you can just go to a FUCS show and stand in the corner and there’s no foul… and anyone can come.”

FUCS, of course, has an exciting lineup of shows booked for the year ahead. This weekend they will host Mal Devisa, a Massachusetts-based musician whose live performances center around her raw voice and spare instrumentation, and Philadelphia native Abi Reimold, both of whom received raves from Pitchfork for their most recent albums.