The Bryn Mawr Film Institute was filled to capacity for the fifth annual Tri-Co Film Festival, which screened student submissions on a big screen and featured the presentation of six awards in five categories to the student filmmakers. Two Haverford students, Nishat Hossain ’16 and Evan Klasky ’19 each took home prizes for experimental filmmaking.

This year’s fest featured 19 films made by students from Haverford, Bryn Mawr, and Swarthmore, culled from over 75 submissions. Six of those films were made by five Haverford students. (Nishat Hossain, a previous Tri-Co Film Fest winner, submitted two films, Conduit and Body/Document.) BUST by Harlow Figa ’16, Awake by Forrest Reid ’18, and The Blue Album by Elena Harriss-Bauer ’19 were all screened, and In Asylum by Evan Klasky ’19 and Hossain’s Body/Document earned prizes for Best Experimental Film.

The Bryn Mawr Film Institute, a nonprofit organization that has occupied and refurbished the historic Seville Theater on Lancaster Ave. in Bryn Mawr, was packed with over 170 attendees from the Tri-Co community and the general public. (Cont. below.) 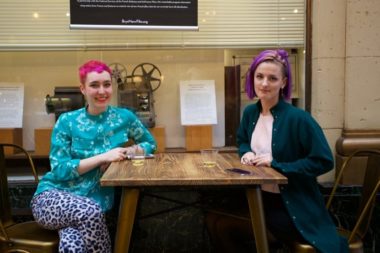 “Seeing my work on the big screen and hearing my voice fill the theater was very surreal,” said Harriss-Baur, whose film featured a compilation of found footage from author Joan Didion in the form of a non-narrative study in experimental media. “There’s nothing like it.”

The Haverford students whose work was shown worked closely with Visiting Assistant Professor of Independent College Programs John Muse and Artist-in-Residence Vicky Funari. This year, Muse taught “Experimental Media: History, Theory, Practice” while Funari taught both “Documentary Film and Approaches to Truth” and “The Documentary Body: Advanced Media Production,” and many of the student films featured in the festival had their origins as projects in these classes.

“I only submitted my film to the festival because I had just finished it by the submission deadline, and John [Muse] had encouraged us to submit work,” said Harriss-Bauer. “It was very validating to have my work included in such a formidable lineup. I was honored.”

The Festival is organized with support from Swarthmore’s Film and Media Studies Department, Bryn Mawr’s Film Studies Program, and Haverford’s John B Hurford ’60 Center for the Arts and Humanities, and features different young alumni directors each year. This year’s fest was directed by Bryn Mawr alumna Dani Ford and Swarthmore alumna Tayarisha Poe and the jurors were New York-based video artist and writer Cecilia Dougherty and experimental documentary filmmaker Alan Berliner, whose First Cousin Once Removed was screened last week as part of the Hurford Center’s STRANGE TRUTH Film Series.