Students, faculty, and staff took advantage of a warm afternoon during finals week to exchange their textbooks and desk chairs for some adorable pups and sunshine. The Student-Faculty Dog Walk brought together dogs, their owners, and campus dog lovers for a social way to destress and get moving during this busy time of year. It seemed to work; the participants, whether human or canine, were all smiles and tail wags.

The event was organized by the Committee for Environmental Responsibility, a group made up of staff, students, and faculty that addresses issues of sustainability on campus and is responsible for the popular “Do It In The Dark” competition every year. This year’s dog walk was the second of its kind. Participants convened outside of Founders Hall, where passing students were invited to pet and play with the dogs before the group strolled over to the College’s Nature Trail.

The stars of the event, of course, were the dogs themselves. Associate Professor of Economics Richard Ball brought his dog Yoda, a rescue mutt, who was only eclipsed in smallness by Scruffy, brought by Katie Tsai ’16. The three much bigger dogs were two golden retrievers named Sebastian and Sandy, belonging to Associate Professors of Political Science Suzanna Wing and Stephen McGovern, respectively, as well as Mabel, a spunky black lab belonging to the President’s Chief of Staff Jesse Lytle.

With a bag of Milk-Bones, a few tennis balls, and a few eager furry friends, the assembled Haverford community members were able to share some much-needed laughs and get some exercise during the last stretch of the semester. 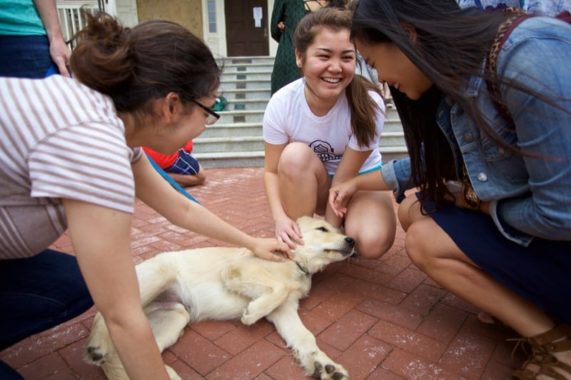