Taught by: Visiting Assistant Professor of Writing and Postdoctoral Fellow in the Writing Program Paul Farber

Here’s what Farber had to say about his class:

“Philadelphia Freedoms” is a course that engages urban history, visual culture, and public space through a close, semester-long case study of Philadelphia. The course spans the history of the city in order to trace how its founding principles have manifested in the lived experiences of its residents over many generations through to the present day. Over the course of 300-plus years, the city has exemplified Quaker visions, revolutionary thought, cultural ideals, and nation building. However, the dualities of freedom and repression, civic ideals and harsh realities, have also characterized the city. Recently, Philadelphia’s identity as a 21st century cultural destination has, too, been marked by recent regrowth and economic revival, alongside long-standing crises in education, urban violence, and economic injustice. The course asks students to examine the relationship between Philadelphia’s founding ethos and its layered built environment. We follow this line of inquiry together to assess how the city embodies its ethical dilemmas and civic possibilities.

Each week, students read a variety of texts— including historical accounts, cultural critiques, and artistic works— in order to reveal and review the city’s complex layers. They also explore the Quaker and Special Collections at our Magill Library, read online maps through GeoHistoryNetwork and OpenDataPhilly, and work in groups to collaborate on a critical archival project in cooperation with local arts/social justice organizations RAIR (Recycled Artist in Residency) and the Mural Arts Program’s Southeast by Southeast.

By the end of the term, each student works individually toward a final writing project that consists of a close study of one street or intersection of the city around course themes, which in turn will populate a class-produced critical atlas of Philadelphia.

This course is grounded in a long-term research project I have been pursuing on Philadelphia’s public art and history. I began this project as the director and co-curator of Monument Lab, funded last year by a Pew Center for Arts & Heritage discovery grant. Many of my Haverford students (including Alliyah Allen ’18, Freda Coren ’17, and Sarah Green ’18) and several faculty and staff colleagues here helped launch the pilot phase of the project, which included a sculptural installation of a Quaker classroom in the courtyard of City Hall and a laboratory space where Haverford students collected proposals from the public that have since been uploaded as an open civic data set through OpenDataPhilly. As Monument Lab’s research and curatorial project grows into its next iterations, I wanted to design a course on Philadelphia that further grounds my intellectual aims with student-led projects and curricular experimentation. The projects we are pursuing this term with RAIR and the Mural Arts Program’s Southeast by Southeast aim to model the sort of reciprocal, scholarly relationships with local arts organizations that I hope to continue pursuing that simultaneously theorize and practice forms of civic engagement. 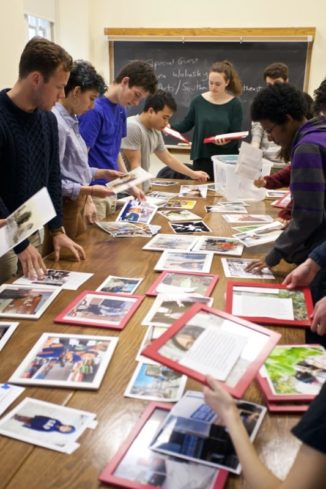 Students lay out photographs from the Southeast by Southeast project brought by Shira Walinsky. 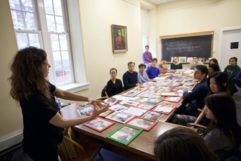 Shira Walinsky (left), from South by Southeast, visits the class. 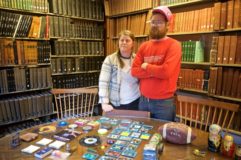 Lucia Thomé and Billy Dufala, artists, during a class visit. 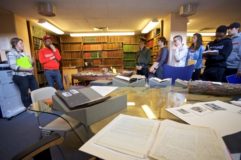 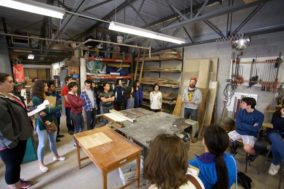 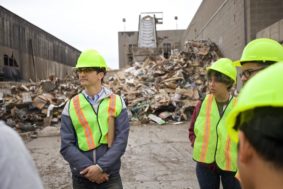 Prof. Paul Farber (left), Miranda Johnson ’19 (right), and other students listen to Billy Dufala during a field trip to RAIR.

See what other courses the Writing Program is offering this semester.