Four years ago as Sam Yarosh ’16 was making his decision about where to attend college, Haverford announced its pioneering 4+1 engineering program with the University of Pennsylvania. (Haverford is the first liberal arts college in the world to enter into such an agreement with an Ivy League engineering program.) The program allows Haverford students to apply as early as the summer before junior year to any of the Penn Engineering Masters programs (bioengineering, chemical and biomolecular engineering, computer and information science, computer and information technology, computer graphics and game technology, electrical engineering, embedded systems, materials science and engineering, mechanical engineering and applied mechanics, nanotechnology, robotics, and systems engineering), and, once accepted, graduate with a Haverford degree (B.A. or B.S.) and a Penn master’s degree in just five years.

“I specifically remember choosing Haverford, in part, because of this program,” says Yarosh. “It provides a fantastic opportunity for Haverford students to get two degrees from two great schools in only five years, while also opening up an avenue into the engineering world for those of us who want to pursue that career path.” (Continued below.) 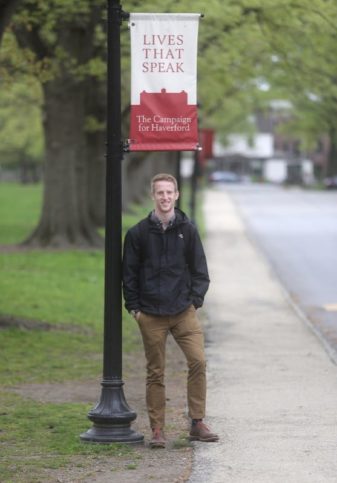 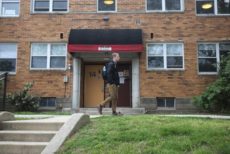 Yarosh leaving his apartment to walk to the train to Penn. 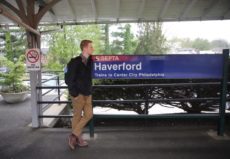 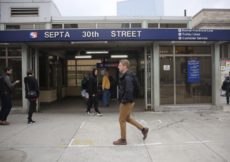 Walking to Penn from 30th Street Station in Philadelphia. 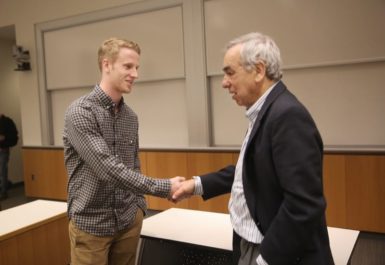 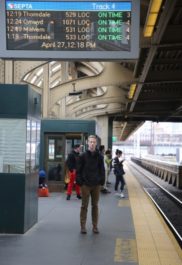 Yarosh waiting for his train back to Haverford. 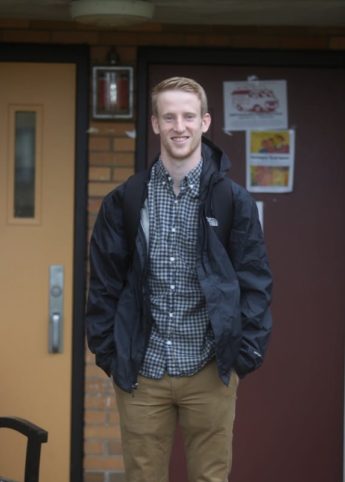 Sam Yarosh ’16 in front of his apartment in HCA before heading to West Philly for class. 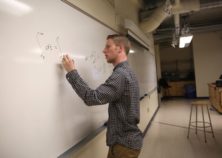 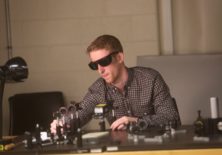 Yarosh in his physics lab.

The physics major has taken three Penn graduate-level classes over the last year as part of the program, and next year will matriculate at the West Philly university full-time to complete his master’s in systems engineering. He is taking two of those classes, “Risk Analysis & Environmental Management” and “Modern Data Mining,” this semester.

“I’ve found that the courses supplement my Haverford classes nicely,” he says. “I wouldn’t say that they are any more difficult than the hardest classes I’ve had at the College, however they have been decidedly more focused on the practical application of the concepts that we learn about, which has been a great change of pace.”

Yarosh has appreciated the diversity of his Penn classmates, which unlike his Haverford courses, include M.B.A. and Ph.D. students, as well as undergraduates. “This provides for an excellent learning experience,” he says, “as I’m often in the classroom with people who have worked in various industries for multiple years who bring a wealth of practical knowledge to every discussion.”

And he enjoys the short commute between the two campuses; he looks forward to the time it allows him to unwind during stressful weeks. (It also allows him the chance to grab a burger at Bobby’s Burger Palace or Shake Shack while downtown.) Though he has, in the past, driven the eight miles to Penn, Yarosh has become a devoted SEPTA rider, picking up the regional rail line across Lancaster Ave. from the College and then taking a quick 10-minute walk to class from 30th Street Station downtown. Haverford even reimburses him for the transportation costs.

“It makes life much easier,” says Yarosh of his College-funded monthly SEPTA pass. “And I’m grateful that the College has made a commitment to ensuring the availability of Penn classes.”

Yarosh, a two-year captain of the soccer team who was named the soccer program’s first Centennial Conference Player of the Year and Scholar-Athlete of the Year, is also a recent recipient of NCAA Postgraduate Scholarship, which he will use to further his studies at Penn next year.