Friday, April 22, was Earth Day 2016, and the campus community celebrated in many different ways. Students exchanged unwanted clothes at the College Apartments, ate locally sourced food in the Dining Center, and made crafts with the Arboretum Committee while enjoying the sunny weather on Founders Green. (More below.) 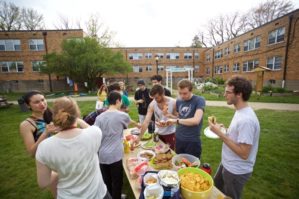 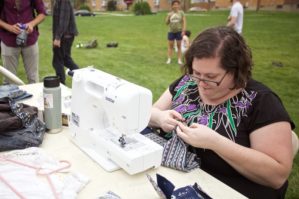 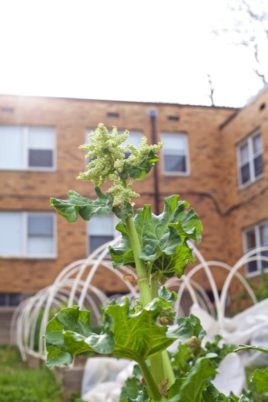 Rhubarb growing in the HCA Garden. 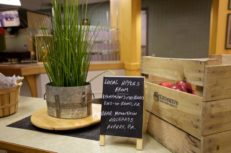 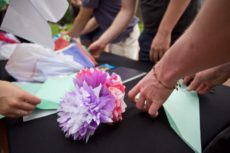 The tissue-paper flowers, up close.

As early as noon, student members of the Arboretum Committee invited passersby to make colorful tissue paper flowers to carry with them or keep in their rooms. The Committee, which engages the community throughout the year in support of the Arboretum, also holds an annual reading of Dr. Seuss’ The Lorax each Earth Day, which pairs well with the Lorax-themed display constructed on Founders Green each year by arboretum horticulturist Mike Startup.

Those who lunched in the Dining Center may have noticed numerous labels detailing a variety of locally sourced ingredients that went into the day’s meal options. Hungry community members could read exactly which farm and town provided their food, many of which were nearby the College in Pennsylvania and New Jersey. The bounty included a massive amount of local and/or organic produce, such as apples, corn, squash, tomatoes, and mushrooms, as well as responsibly raised chicken and turkey and homemade bread made from locally sourced flour. It doesn’t get much more local than the Haverfarm, the on-campus plot and garden provided kale for the salad of the day and lemon and mint for the Dining Center’s daily infused water.

The Dining Center’s local, ethical, sustainable push preceded Earth Day and will continue after—the holiday came just weeks after the College officially signed on to the Real Food Campus Commitment, which aims to have local, sustainable, and organic food make up 20% of the college’s food budget by 2020—but all the day’s signage brought awareness to their efforts.

Later in the afternoon, there was another Earth Day celebration hosted by a variety of student groups working in conjunction with E-haus, a community house that promotes sustainable living and offers a vegan meal each week to the entire student body. E-Haus member Zoë McAlear ’16 coordinated the effort with help from the Office of Residential Life, the Haverfarm, Bricolage, and Quaker House. The event, which was held at the Haverford College Apartments, was centered around a clothing swap, which not only allowed students to get rid of some old threads and shop for new ones without spending any money, but also encouraged mindfulness of belongings that might otherwise be thrown away during hasty move-outs at the end of the semester. McAlear and other students involved hoped the event would lead to greater use of Goodwill bins, which will be available to students who want to give away clothes and other items as they move out of their dorms next month. Quaker House provided food for the swap, and student workers from the Haverfarm made silkscreened t-shirts.

At another event later in the day, environmentalist group EarthQuakers held a film screening as part of their initiative to eliminate the use of bottled water on campus.

As with the D.C., sustainability efforts are being undertaken all over campus all year long; Earth Day is just an opportunity for to shine a light on that work and bring the spirit of Earth Day into the everyday lives of members of the Haverford community.