Ultimate Frisbee teams from up and down the east coast converged on Haverford’s campus last weekend to participate in the 22nd annual Layout Pigout tournament. Haverford’s men’s team, Big Donkey Ultimate, pulled off multiple upsets to take home fourth place in a tournament that hosted 20 teams from as far as Maine and North Carolina.

The tournament, which started in 1995 and is one of the oldest continuously running ultimate tournaments in the world, was held on Saturday, March 19, and Sunday, March 20. While Layout Pigout has demonstrated staying power for over two decades, this year’s contest was distinguished by an impressive array of talented teams and heated matchups. Competing teams included Franciscan and Brandeis, who appeared in the Division III national championship last year, as well as Richmond, Williams, and Bowdoin, all of which are ranked among the top 25 D-III teams in the nation by ultiworld.com.

“We invited some of the top D-III teams in the country, and got a lot of recognition as a good tournament,” said Haverford Coach Matt Lowenthal. “This year, the team is making more of a name for itself in the D-III scene… [so] we wanted to bring some of the top competition in and make this sort of a showcase tournament on the D-III calendar, and get the Haverford name out there.” 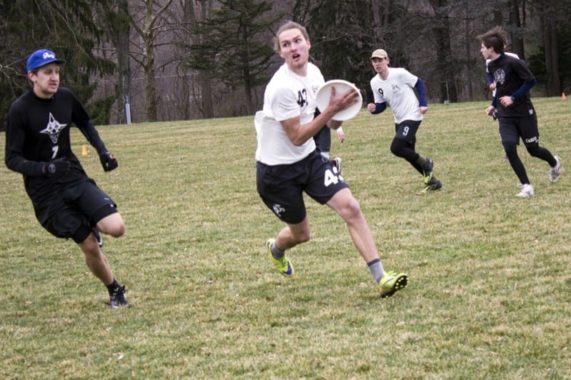 Haverford, which was placed in a pool with Williams, Bowdoin, SUNY-Geneseo, and conference rival Muhlenberg, went 2-2 in Saturday’s pool play, pulling off an impressive one-point upset against Bowdoin, and a handily-won 10-5 match against Geneseo. This was enough to earn them a first-round bye on Sunday and a spot in the quarterfinals.

Sunday’s championship bracket was dominated by Brandeis and Richmond, who steamrolled their way through their quarterfinal and semifinal matches by margins of 5 or more. In the quarterfinals, Haverford scored an impressive win against the D-I RIT, who had just beaten defending national champions Franciscan. However, the hometown Donkeys then fell to Richmond 13-7 in the semifinals. The championship game saw Richmond earn a dominant 15-10 win over Brandeis, and the 3rd place game was won by Williams in a close 11-8 win over Haverford.

This is the second ultimate tournament to be held on Haverford’s campus this year. Haverween, which occurs annually in the fall, featured both men and women’s teams, alongside Haverford alumni. Up next for the men’s team, after their impressive finish at Layout Pigout, is a trip to Myrtle Beach for D-III Easterns in early April, followed by Sectional and Regional tournaments, and hopefully a trip to the National Championships in May.