With tapestries spread out along the back wall and café lights strung overhead, the yard of HCA 50 has been transformed into a warm, inviting concert venue. The sound of guitars and keyboards and the thumping rhythms from the drum kit carry across the grounds of the Haverford College Apartments as dusk falls on this warm early fall night. The “backyard barbecue bonanza” is a kickoff of sorts for a new community house on campus: Music and Arts House, which is not only celebrating its first event, but also its first year in existence.

The 11 upperclass students who live in Music and Arts House came together last spring to apply to live together and create a space for artists of all mediums to create and collaborate for the exploration and enjoyment of the greater Haverford community. The house was one of five community houses that had its applications approved by the Residential Life Committee and now serves the Haverford campus with programming and events. The others community houses are the long-running eHaus, a cooperative focused on environmental sustainability that just celebrated its 25th anniversary; Nerd House, which for the three years has brought strategy board game nights, Miyazaki movie screenings, videogame tournaments, and a Haverfest Renaissance Faire to the community; and Quaker House and Christian House, which are both faith-themed intentional communities.

From singles to suites to on-campus apartments with their own kitchens, there are many housing options on Haverford’s campus. (Such diversity leads to 98 percent of Fords living on campus.) Beyond different room configurations, though, there is special-interest housing for those looking for a substance-free home and quiet study space (Cadbury House), housemates with a shared interest in the culture of the Spanish-speaking world (La Casa Hispanica), or a community committed to the history, legacy, and traditions of the African diaspora (Ira de A. Reid House). But community housing is something different.

Every spring before room draw, students are invited to apply for one of four (sometimes five) possible community houses in HCA and Yarnall, which is located across the footbridge on Railroad Avenue. Applicants must be a group of 11 students (13 to live in Yarnall) with not just an idea for the type of community they’d like to create, but also a well-thought-out plan for how that community will serve the campus at large.

“The idea of a community house is that they should bring something to the community that the community doesn’t already offer,” says Kristin Tatum ’16, one of the co-heads of the Residential Life Committee, which approves and rejects the applications. “For a long time these ideas were very social justice-focused, but recently they have branched out to include providing alternative spaces. Nerd House, for example, does a nice job of providing a space that offers really fun activities and a non-alcohol-heavy environment on the weekends.”

Decisions are made before the week before the general room draw to give students whose community house ideas aren’t accepted time to find another living situation. Some years the Residential Life Committee has had as many as 12 applications, so it can be quite competitive. But the committee looks for applications that demonstrate, among other things, a focused, realistic goal for the house that relates to the principles of concern and respect for others, social justice, community, or service. 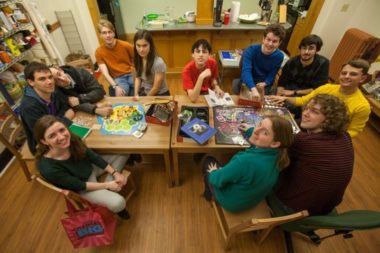 Nerd House residents and Humans vs. Zombies organizers Chris Wong ’17 and Ian Brastow ’17 demonstrate how to play the game.

For Vivian Sun ’17, a resident of Christian House, community housing is so much more than just a way to find people to cohabitate with outside of the usual room draw routine. ” I didn’t know most of the people I live with last year, but we got to know each other really well this year because we all came in knowing that we are doing this because of how God is leading us, rather than just because we need a roommate” she says. “So it’s like we’ve come together with a purpose and are meeting new people because of that purpose.”

Daniel Plesniak ’16, a founding resident of Nerd House, says that he and his 12 roommates see their job on campus as a community service position, hosting events for an underserved niche at Haverford and creating a space on campus where fellow Fords can feel free to drop by for a game of Settlers of Catan or Mario Kart.

The idea of community housing, according to Director of Residential Life Marianne “Smitty” Smith, grew out of the success of eHaus, which was founded in 1990 as a way for students to live out their environmental ideas every day.   “[Previously] it was called ‘program housing,'” she says. “And then when I came into this position in 2006, we, the Residential Life Committee,  decided that maybe the focus should be community housing because that’s actually what you are building.”