On a beautiful fall day last Saturday, Bi-Co students participated in the Climate Change Walk, traveling over nine miles from Haverford to the Reading Viaduct in Philadelphia, where the site of the old railroad will eventually be constructed into an elevated park. By participating in the walk, students hoped to raise awareness for global climate change and support The People’s Pilgrimage, an international movement for “a safer future free from climate change.”

The People’s Pilgrimage was created by OurVoices, an international, interfaith group that speaks out against Climate Change, and is led by Yeb Saño, the former Filipino Climate Ambassador. With groups of pilgrims, Saño is currently walking from Rome to Paris (about 1500 kilometers) for the 2015 United Nations Climate Change Conference, which will start on November 30, with the goal of achieving a legally binding universal agreement on climate.

Learning about the movement from Assistant Anthropology Professor Joshua Moses, Diana Schoder ’17 organized the last weekend’s walk. “Contributing our perspective to the UN climate talks in December is both difficult and necessary,” she said. She organized the Bi-Co chapter of The People’s Pilgrimage because she feels it is important to “show support for an international agreement that addresses climate change in a meaningful way.” Unfortunately, due to sickness, she wasn’t actually able to attend the walk, which was, instead, led by Anna Saum ’18. 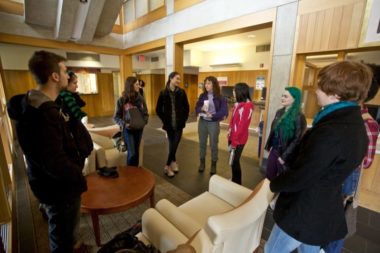 Walking along the Schuylkill River, enjoying the Philadelphia skyline.

Carrying a sign that reads “Change the Politics, Not the Climate,” the group walked from the Whitehead Campus Center through Fairmount Park, along the Schuylkill River, and down the Benjamin Franklin Parkway downtown. As students engaged in conversations with one another, the route seemed to have shortened; with others’ company, the trip to Philadelphia became a relaxing walk from Haverford. Participants agreed that the only disappointing part of the experience was seeing numerous sites where plastic waste and litter were on the sidewalk.