Haverford Libraries, in consultation with Assistant Professor of Linguistics Brook Lillehaugen, have made a major new acquisition: a second edition of a Zapotec catechism and a few other religious texts, published in Mexico in 1766. These bilingual (in Spanish and Zapotec) religious texts were purchased last month from the Philadelphia Rare Books & Manuscripts Company.

Zapotec is an endangered language family indigenous to southern Mexico. One of its now extinct dialects—Colonial Valley Zapotec, in which Lillehaugen specializes— is preserved among written Zapotec documents that survive from the period 1500-1800s.

Sarah Horowitz, curator of rare books and manuscripts and head of Quaker and Special Collections, spearheaded the acquisition because, when she noticed Zapotec materials in one of the catalogues from Rare Books, she thought they would be of use to Lillehaugen and her collaborators on the Ticha Project, an online collection of Colonial Zapotec Texts. Additionally, she thought it would help further build the Library’s collection of Latin American documents. 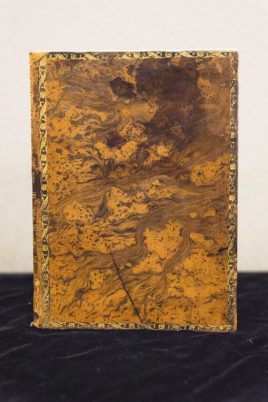 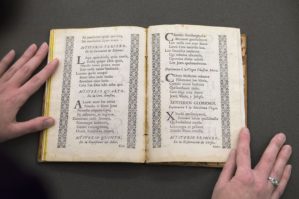 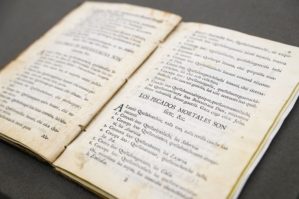 This important acquisition features three parts: a Spanish introduction, Spanish prayers paralleled by their Zapotec translation, and Levanto’s catechism. Written by Spanish Catholic priests, with the aid of the Zapotec people in the 18th century, Levanto’s catechism was used by Spanish colonizers to convert the native population in Mexico. Haverford’s version is especially noteworthy because it is only the second known copy of the catechism. There is another incomplete copy at the John Carter Brown Library, and only copy of the first edition that exists is incomplete.

Lillehaugen will use this book as the main focus of her course “The Structure of Colonial Valley Zapotec,” but it will also be digitized and added to the Ticha Project online. Additionally, it will be accessible to anyone who visits Quaker and Special Collections and wishes to view it.