The lobby of Magill Library was lively on Tuesday evening as students, professors, and authors convened to celebrate Testimonies in Art & Action: Igniting Pacifism in the Face of Total War, the newest exhibition in the Sharpless Gallery. The opening included roundtable panel “Three Guineas, Pacifist Activism, and the Event of Total War”—featuring outside scholars Jessica Berman, Farah Mendlesohn, Jean Mills, and Paul Saint-Amour—that discussed the exhibit’s themes of pacifism, activism, writing and ethics, forms of resistance to total war, and social justice during the interwar period. It was followed by a reception.

This interactive digital humanities and Special Collections exhibition, curated by Visiting Assistant Professor of Writing and Fellow in the Writing Program J. Ashley Foster and the students from her “Peace Testimonies in Literature and Art” writing seminar, examines art and actions that spread a message of “positive peace” in the face of total war in the early 20th century, specifically related to the Spanish Civil War. The works of artists and authors such as Virginia Woolf, Pablo Picasso, Muriel Rukeyser, and Langston Hughes were examined by freshmen in both Foster’s spring 2015 and current fall semester of her seminar for the exhibit, as were primary source materials created by Quaker volunteers working in Spain, many of which were found in Magill’s own Quaker and Special Collections. 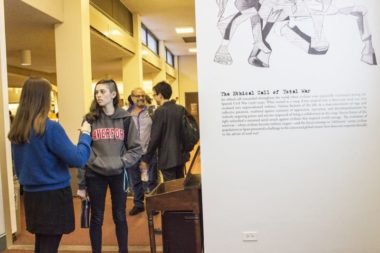 Librarian of the College Terry Snyder 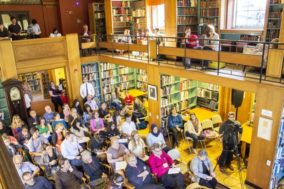 The packed house for the opening panel 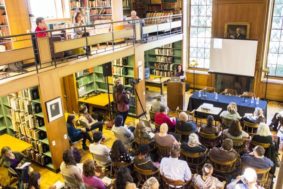 J. Ashley Foster at the podium for the panel “Three Guineas, Pacifist Activism, and the Event of Total War.”

The students creators and curators expressed excitement about being able to showcase their work less than two months into their first year at Haverford.

“Having this interactive experience where I can showcase my ideas with other people and have them give me feedback on it is definitely something that’s different than what we have in a traditional classroom setting,” commented Tomas Matias ‘19, who was part of a group that examined how societies can create an environment of sustainable peace.

The Sharpless Gallery exhibition is supplemented by an online component in which students created annotations for different passages of Virginia Woolf’s Three Guineas. The students had access to scans of Virginia Woolf’s scrapbook materials, which she compiled in the process of writing her book, and were able to include ideas from them into their annotations. The students’ online work was also connected by hyperlinked threads to demonstrate how certain themes “flow throughout the novel,” as Matias noted.

“What I wanted to do was make the connections and the threads that ran through Three Guineas really obvious to anyone who was just becoming introduced [to the text], and also allow them to discover those threads for themselves,” said Foster. “That’s why the students hyperlinked their projects to each other’s. … They would be working on one part of the text, but that part of the text relates to a different part of the text, and so that relationship was made more clear, and the students would establish some relationships that I hadn’t thought about.”

In addition to reading historical pacifist works, such as Three Guineas, students also prepared for the exhibit by reading modern critical works by authors who were on Tuesday’s panel. Then, at the opening, they were able to share their work with these scholars in person.

“I think this whole project, the interactive nature of it, is very much a part of that initiative … to peacebuilding and peacemaking,” said panelist Jean Mills, author of Virginia Woolf, Jane Ellen Harrison, and the Spirit of Modernist Classicism. “We’re in dialogue about all these issues with a new generation of scholars.”

Making thematic connections and initiating dialogues seemed to be primary objectives of the exhibition’s work, which Mills said “doesn’t just pay lip service to a dialectic… it actually enacts it. That’s what I’m enjoying so much.”

Testimonies in Art & Action: Igniting Pacifism in the Face of Total War will be on view in Sharpless Gallery through Dec. 11.