On Friday, September 11, students packed into Chase Auditorium for the first screening of Capitalish, a documentary film shot and edited this past summer by Haverford students (from left, in photo above) Sarah Moses ’16, Anna Bullard ’15, David Roza ’15, and Nick Gandolfo-Lucia ’16. These students were supported by the Interdisciplinary Documentary Media Fellowship, now in its second year, and were advised by Associate Professor of Political Science Craig Borowiak, Artist in Residence Vicky Funari, and Digital Media Specialist Charles Woodard.

Capitalish follows four Philadelphia worker cooperatives—a child care organization, a home health company, a coffee bar, and a taxi alliance—that Borowiak and the Philadelphia Area Cooperative Alliance (PACA) put the filmmakers in touch with. Cooperatives are independent organizations, in which members share both work and ownership, mutually striving towards a common goal. 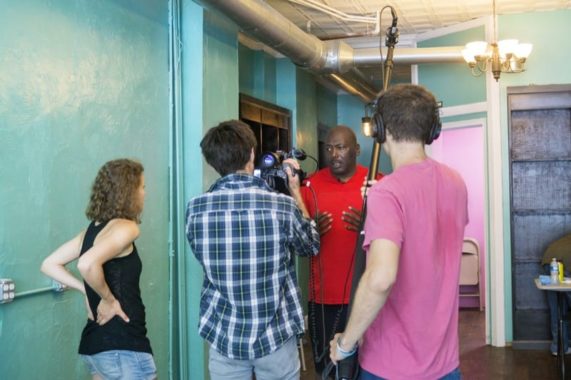 During the recent post-screening question-and-answer session, filmmaker Gandolfo-Lucia explained why the film focused on these four organizations. “We found ourselves really interested in labor, which was most evident in worker cooperatives,” he said.

“I hope the film has a life within the Philadelphia Cooperative movement,” said Moses, one of the other fellows, “and that it can be used as a tool for PACA or current cooperatives to show other businesses that are thinking of converting to a cooperative that there is a vibrant community of similar business structures in the city.”

Capitalish, which was also screened last Thursday in Center City, was sponsored by the Hurford Center for the Arts and Humanities, the Center for Peace and Global Citizenship, the Environmental Studies Program, and the Office of the Provost.  It was the second film to come from the Interdisciplinary Documentary Media Fellowship, which, in its inaugural year in 2014, produced a documentary on the Gulf of Mexico in the aftermath of the Deepwater Horizon oil spill.