Robotics Club members Brandon Smith, Jack Rasiel, and Casey Falk (all ’16) with the quadcopter they built.

After successfully completing a land rover as an inaugural project, the Haverford Robotics Club decided to take on drone construction. The club, which was started by computer science majors Jack Rasiel ’16, Casey Falk ’16, and Brandon Smith ’16 only last year, initially hoped to tackle the creation of a submarine-like bot that could explore the depths of the Duck Pond, but “we figured that an under-water bot with our somewhat limited experience would be slightly more challenging as a second-starter project than necessary,” said Falk. “Our second idea was to build a drone that could take pretty aerial shots of campus.”

With the help of some online tutorials and KINSC Instrument Specialist George Neusch, who helped with the cutting and drilling of some parts, the three Robotics Club founders and three additional members worked all year to create the quadcopter, and with the recent arrival of a GoPro camera that they’ve attached to the unmanned flying robot, they are now ready to explore and capture the skies around Haverford. Up next? Playing with automation, so the drone can fly itself based on programs. 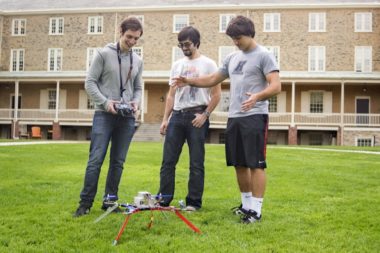 Brandon Smith, Jack Rasiel, and Casey Falk (all Class of ’16) attach the GoPro camera to the quadcopter