Imagine driving for miles and miles, for a complete year, 365 long days, in a gray Volkswagen Beetle with a hateful word—fag—spray painted in red across the passenger window and U R gay splayed across the hood.

That’s what Erin Davies did after her car was vandalized outside her apartment building in Albany, N.Y., apparently because she had a narrow, rainbow colored sticker in her back windshield. The documentary filmmaker and speaker, along with her car—now dubbed the “fagbug” and repainted in rainbow stripes—was on Haverford College’s campus on Apr. 21 as the culminating event for Pride Week.

“It takes a lot of courage to do what she did,” Robin Banerji ’15, who is co-head of Haverford’s Sexuality and Gender Alliance, says while standing outside Founders, where the fagbug was parked. SGA screened Davies’ 2014 documentary Fagbug Nation and invited her to give a director’s talk.

“The power of this image of this rainbow bug is really evocative,” says Banerji, 21, an economics and linguistics double major from Bethesda, Md. “Her story is really compelling.” 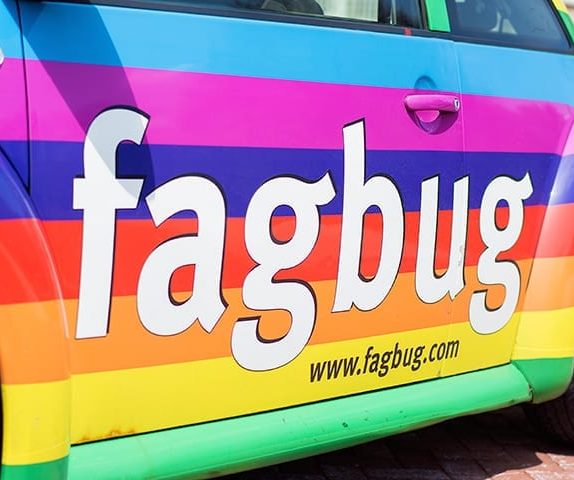 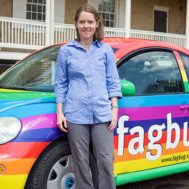 Documentary filmmaker Erin Davies drives the fagbug around the country to raise awareness around homophobia. 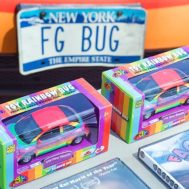 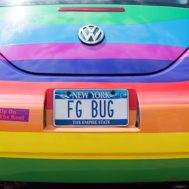 At first, the Apr. 18, 2007, homophobic incident made Davies feel “shocked, paranoid and confused,” says the 37-year-old Syracuse, N.Y., resident, who is gay. “I was humiliated.”

But fate, it could be argued, changed all that. Her insurance company was unable to fix her car right away—and so the Bug sat on the street screaming its pejorative words. Then a funny thing started to happen. People, who had never even said hello, apologized for what had happened to her car and began engaging her around gay issues, even as others complained about the graffiti-scarred vehicle, wanting it removed from the street.

“It struck a nerve with people,” she says. 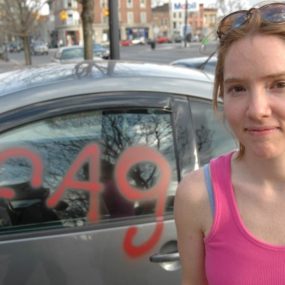 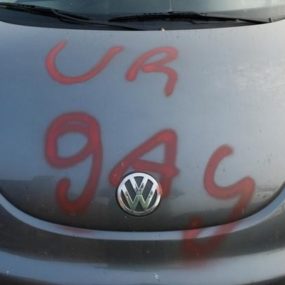 Erin Davies VW Beetle was spray painted in 2007 while parked outside her apartment building in Albany, N.Y. Photo by Chris Shields © 2007

At a friend’s urging, Davies decided to embrace what happened and drive the Beetle for a week to raise awareness. “Those seven days seemed like seven years,” she says. Still, that week turned into a year. And after the year, during which Davies drove 55,000 miles and visited 41 states over 58 days, she finally repainted her Bug—as a bright, in-your-face rainbow declaration of gay pride and named her car “fagbug,” placing the words across the side of her car in neat, white letters. Her New York license plate is FG BUG.

Since then, Davies has traveled to all 50 states, had 404 notes left on her windshield (all but five positive) and made two documentaries. The 2009 Fagbug chronicles that first year. The sequel, Fagbug Nation, tells the story of Davies getting the fagbug to Alaska and Hawaii to complete her goal to visit all 50 states.

The fagbug has 305,000 miles on it and has fostered its share of understanding around gay issues. Davies says she plans to keep on driving even though, she allows, she doesn’t care for driving.

“The car,” she says, “is a conversation starter. … I use the name of the car to open dialogue.”