I was given the delicious responsibility by Fords Against Boredom (FAB) to be one of the four judges at the finals for DC Iron Chef.

The competition, which is modeled after the television show, has its own twist: Teams are restricted to ingredients that can be found in Haverford’s Dining Center, or DC. On Friday, FAB brought back the winners of the two qualifying rounds that were held last semester. The Panhandlers, who won in November, faced off against December’s champions, Team Enthalpy, as in “if you can’t take the enthalpy, get out of the kitchen!”

The secret ingredient was, drum roll please, that breakfast staple grapefruit. It had to be used in each of the dishes. And just to keep things interesting, after the appetizers were served, a culinary curveball was thrown at the teams, requiring them to use honey in the main course and the dessert.

Audra Devoto ’17 and Zac Oglesby ’17 of the Panhandlers prepare their entree. 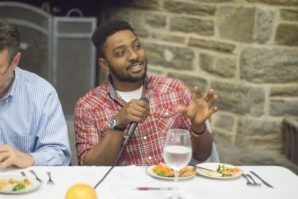 Ben Hughes gives his opinion of the appetizers. 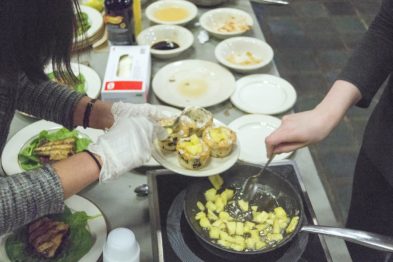 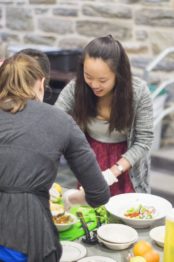 Besides myself, the other judges were Ben Hughes from the Office of Multicultural Affairs; Steve Watter, the dean of student life, and Tom King, the executive director of public safety for the Bi-Co. Teams also are encouraged to get non-student members of the Haverford Community to join in the fun. The Panhandlers competed alongside Classics Professor William Tortorelli.

All the judges agreed the dishes served by both teams were phenomenal. The Pandhandlers took the appetizer round with a mashed carrot and grapefruit spread on crustini. Team Enthalpy, however, pulled ahead with the main course by presenting a beautiful honey glazed chicken breast on a bed of grapefruit and spinach. It was so good that I wouldn’t let them take it away until I had cleaned my plate!

The dessert round was a surprise with Team Enthalpy presenting what looked like an ordinary DC cupcake drizzled with honey and ice cream, but which in fact hid a gooey pineapple and grapefruit core. It was a tough decision, but the final win had to go to Team Enthalpy. “Grapefruit was a real curveball,” allowed team member Katie Tsai ’16. “Actually, we were expecting matzo since it was Passover!”

Fords Against Boredom (FAB) is an organization of students funded by Students’ Council that puts on non-alcoholic events every weekend both on and off campus. Events to come this semester include a Phillies Game, Ben and Jerry’s Bingo, and an outdoor showing of Big Hero 6 with a Nutella buffet for Admitted Students Day! 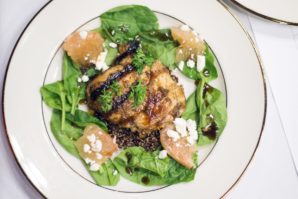 Tom King gives his opinion on one of the dishes. 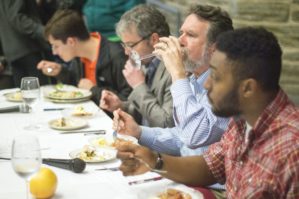 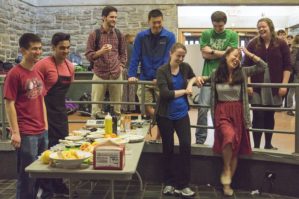 The winning Team Enthalpy and spectators. 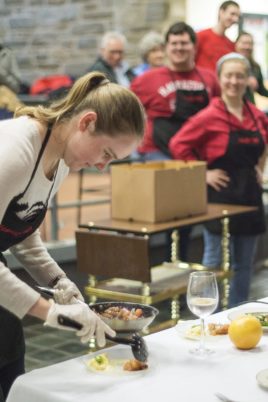 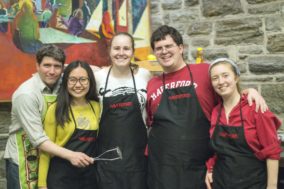 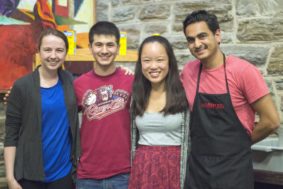