Bi-Co Bands and Songwriters was launched in the spring 2014 semester by Andrew Szczurek ’16, who initially came up with the idea so that his own band, Bazmati Vice, could get the chance to do an on-campus performance. This blossomed into something bigger as Szczurek reached out to other Haverford and Bryn Mawr bands to perform with. Individual songwriters jumped onto the bandwagon as well. The event turned into a mini-festival of sorts as it soon became clear that there was a lot of musical talent on campus seeking platforms for performance.

“The event was a big success and helped performers [become] better known to and appreciated by the Bi-Co community,” says Szcurek, who sings and plays the electric mandolin alongside band members Chris Gibson (drums), Clayton Brandt (guitar & vocals), John Kerber (bass), and Bryn Mawr College student Agatha Sloboda (keys & vocals). “This semester, it was all that but better: more groups, a broader range of genres, more Bryn Mawr representation and, in my opinion, even better music.”

The evening was divided into two parts: the first for songwriters, and the second for bands. Tatiana Hammond ’15 and Liam Lynch were the two songwriters of the evening. Hammond is also part of the Daisy House folk/rock band duo along with her father, Doug. The two formed Daisy House in 2011, with Tatiana on vocals and her father on guitar, bass, vocals, and keys.

Szczurek plans to continue this semesterly event until his graduation, and hopes that someone will take over from him after he departs Haverford.   “Overall I think the music scene in the Bi-Co is far more vibrant than people think, and hopefully Bi-Co Bands and Songwriters will help everyone realize this,” says Szcurek. 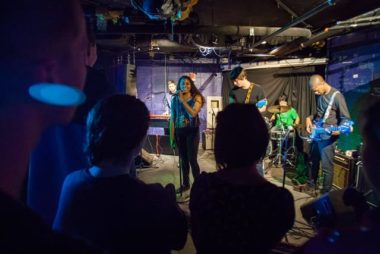