The four students participating in Haverford College’s newly launched Interdisciplinary Documentary Media Fellowship have returned from their first trip to the Gulf Coast: a four-day, whirlwind tour from Pensacola, Fla., to New Orleans, La., during which they filmed Assistant Professor of Chemistry Helen White and her two student interns, Alana Thurston ’16 and Chloe Wang ’17, as they collected oil samples. 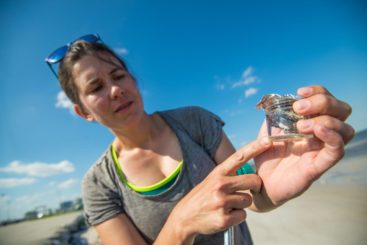 Assistant Professor of Chemistry Helen White with a sample

The documentary students filming White and her students on the Gulf Coast.

Some of the scientists’ oil samples 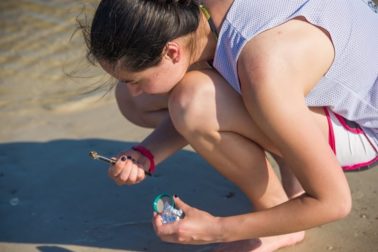 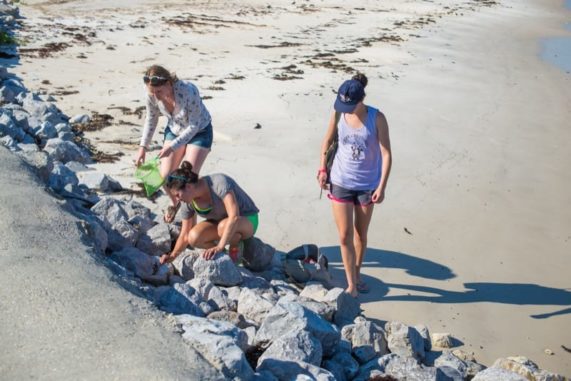 This new fellowship—sponsored by the John B. Hurford ’60 Center for the Arts and Humanities, the KINSC, the CPGC, the Office of the Provost’s Louis Green Fund, and the Department of Instructional and Informational Technology—focuses on the enduring consequences of the Deepwater Horizon oil spill. White and Artist in Residence Vicky Funari drafted the proposal together after collaborating on a project about the causes and impacts of waste in the Delaware River. White has been studying the Deepwater Horizon oil spill since 2010 and collecting oil samples with students since 2012. During that time, she came to realize that her research could benefit from a documentary filmmaker who could go beyond her own scientific focus.

“It became apparent that there were numerous stories to be told,” White says, “and the visually stimulating environment of the Gulf of Mexico easily lent itself to a collaboration with a visual medium… We also realized that a project of this nature could be used as a test model for a visual studies fellowship that could address different themes and approaches in the future.”

White and Funari now serve as advisors to the project.

The documentary team, made up of Hilary Brashear ’14, Dan Fries ’15, Gebby Keny ’14, and Sarah Moses ’16, used the trip to film data collection, the local landscape, and wildlife. Most of the group had not been to the area before, and the trip served as an opportunity to gain some familiarity and focus. During their time in New Orleans, the team consulted with a local artist and two of Funari’s friends to flesh out the possibilities of their documentary. Though the film’s exact form and content have yet to be determined, Fries says that it will go beyond the “political machinations and corporate grossness” that many other documentaries on the spill have focused on. Moses says that one of the group’s main priorities is to establish a grassroots connection in the area.

Currently the students are sifting through footage and fine-tuning their plans before a possible second trip to the Gulf in July. They plan to interview the director of the Nature Conservancy on Grand Isle and hopefully film an engineer who lives in Baton Rouge and works for Halliburton. In order to keep up with the group’s progress, follow their posts on the Humanities Center Decentered Blog. The final cut of the film should be completed by August 1.