Here’s what Young has to say about her course:

In this course, we study how British and American culture has defined the child since the eighteenth century. We begin with the origins of children’s book publishing, reading some of the first books ever marketed to children, such as A Little Pretty Pocketbook and The History of Goody Two-Shoes. We also examine the other printed materials produced alongside these early children’s books, such as paper dolls and juvenile board games, including the first version of The Game of Life published in 1790. Moving into the 19th century, we read children’s literature classics—Lewis Carroll’s Alice in Wonderland, Louisa May Alcott’s Little Women, and J.M. Barrie’s Peter Pan—alongside famous critical interpretations of these works. We end with Dr. Seuss’s The Cat in the Hat, Ezra Jack Keat’s The Snowy Day, and Maurice Sendak’s Where the Wild Things Are, discovering how these 20th-century picture books carry subtle references to the earlier print cultures we have examined.

I want students in this course to take away a stronger understanding of the history of children’s literature in Britain and America and the ever-evolving definitions of childhood itself. I also hope that students can use this course to better understand twenty-first-century media cultures for children and to place their own experiences within this larger history.

I created this course because I wanted to share these exciting literary texts and archival materials with students. In my research, I have studied and written about 18th- and 19th-century board games produced in Britain for kids, and I have always found it fascinating how these beautiful, ornate games lay out class, gender, and racial hierarchies with such insidious care. My second book project examines these games in context of British and American children’s literature of the period, looking at how these materials coalesce into a broader culture narrative that equated modern professionalism and the modern economy with youth and childhood. I very much conceptualized this course as an opportunity to share my research on these unusual materials with students and to show them not just the children’s literature of the 18th- and 19th century, but also the broader culture that surrounded this phenomenon. 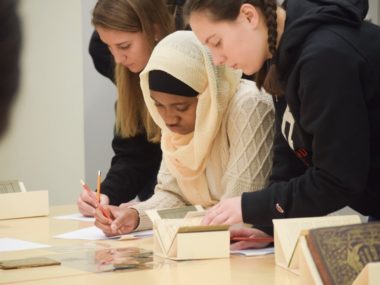 Some of the vintage books the “Childhood and Children’s Literature” class got to see during their visit to Bryn Mawr Special Collections. Photo by Sarah Jennings ’21

Rosetta Young speaks to the students in her “Childhood and Children’s Literature” class during their visit to Bryn Mawr Special Collections. Photo by Sarah Jennings ’21

Books and games in Bryn Photo by Sarah Jennings ’21

Students in Rosetta Young’s “Childhood and Children’s Literature” class divide into groups to playing the 1790’s version of the Game of Life alongside the 1960s version. Photo by Patrick Montero

Students in Rosetta Young’s “Childhood and Children’s Literature” class divide into groups to play the 1790’s version of the Game of Life alongside the 1960s version. Photo by Patrick Montero 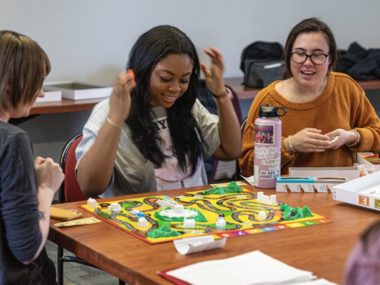 Students in Rosetta Young’s “Childhood and Children’s Literature” class play the 1960s version of the Game of Life. Photo by Patrick Montero.

See what other courses the Writing Program is offering this semester.