Haverford’s Dining Centre offers students plenty of opportunities to prepare their own meals alongside its buffet-style dishes. But on Feb. 28, Fords Against Boredom (FAB) invited students to put those cooking skills to the test and to showcase the potential of DC ingredients in their latest iteration of their Iron Chef competition. As the strong turnout proved, this event is popular amongst students, who filled the DC to support their amateur-chef friends.

Four teams competed in front of a packed crowd and a panel of judges—President Wendy Raymond, Deans Katrina Glanzer and Nate Diehl, and Johnluca Fenton ‘21, a member of the Committee for Environmental Responsibility—for a donation to a charity of their choice. They were given time constraints and limited to ingredients that could be found in the DC, so that everything they made could be replicated by students looking to spice up their lunch breaks.

The competition was split into two rounds—a main course and dessert—that were based around a mystery ingredient that needed to be incorporated into the recipe. In round one, all teams needed to use tofu, and in round two, each team was given a unique ingredient, with honeydew melon, chia seeds, beets, and banana being chosen at random. 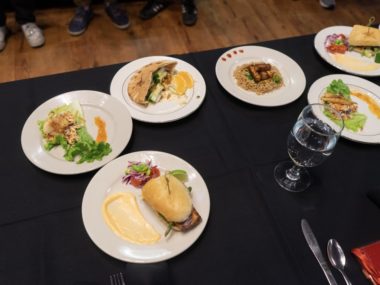 The final entrees of all teams.

Squeezing excess moisture from the tofu, the “mystery ingredient” in round one of DC Iron Chef. 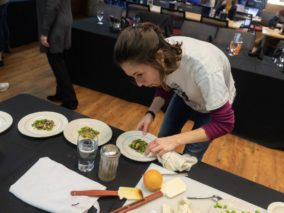 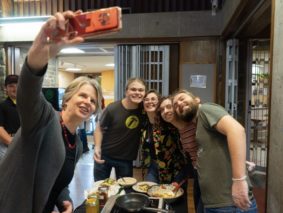 Judges considered taste, presentation, and sustainability in their verdicts. The sustainability category was best exemplified by the DC Hacks team and their zero-waste orange-peel bowl, demonstrating the inventiveness of the participants.

The winning team, however, was Grainsley Kanesie, who wowed the judges with their dishes: stirfry tofu in pita, complemented by sriracha mayo, radish, and cucumber, and a dessert of caramelized honeydew melon with ice cream and paprika dip. The latter was one of the highlights of the night. Said Elle James ‘21, who filled in for President Raymond in the judge’s seat later in the evening: “It opened my eyes to the potential of the DC honeydew.”

“I was profoundly impressed by the culinary skills and quick thinking of the chefs,” said Glanzer, the first-year dean who was assisted in her judging by her son Levi.

“The creativity shown here, and the fact that they were able to make a dish in 25 minutes, is incredible,” said Diehl, dean of residential and community life. “It goes to show that with a little love you can take anything in the DC and make a five-star meal.”