Under the dimmed lights of the Cantor Fitzgerald Gallery, the first-person narration echoes: “1976 created a space of wonder in me. It was the first time that the city of Philadelphia deeply engaged me. It was a year of marching bands, tall ships, crappy red-white-and-blue painted fire hydrants, all manner of hoopla, Philly Pride, and wacky, wonderful larger-than-life room-sized birthday cakes.”

This is the story of Bicentennial City, the latest exhibit in the Cantor Fitzgerald Gallery, which takes its name from its centerpiece documentary In 1976, Philadelphia played host to what was meant to be a sort of “World’s Fair” that welcomed countless visitors to the city to ring in the 200th anniversary of the signing of the Declaration of Independence. With projections anticipating 20 million visitors, the city braced itself to take center stage in the nation’s celebration. In reality, the Bicentennial in Philadelphia came to represent fractured power structures and knotty understandings of patriotism, as heard in the above voiceover from Visiting Assistant Professor of English Thomas Devaney.

Over the summer, five Bi-Co students (Julia Coletti ’21, Jixin Jia ’21, Eddie Ogborn ’19, Cole Sansom ’19, and Grace Sue BMC’20) joined forces to capture the complex spirit of the 1976 Bicentennial through documentary filmmaking as part of the 2019 Doculab, sponsored by the John B. Hurford ’60 Center for the Arts and Humanities. Under Devaney’s leadership, the resulting 40-minute documentary explores untold stories of those affected by the tidal wave of the Bicentennial 34 years ago.

“In 1976 there was fatigue and there was exhaustion, the city was on the ropes,” said Devaney. “There were great expectations for the Bicentennial in Philadelphia, going back 20 years before 1976 and one thing that is very clear is that it suffered from the ‘Curse of Exaggerated Expectations.’”

This “curse” can be seen both logistically (despite expecting an estimated 20 million visitors to the city, only 2 million actually came to Philadelphia for the celebration), and on a personal level, as the documentary, Bicentennial City, reveals.

“Part of my own thinking about the film is to shift the narrative that the city tells about itself,” said Devaney. “One way we do that in the film is to focus some of those untold stories, like Milton Street and the Vendor Wars—fighting City Hall to have the right to sell their products during the Bicentennial—and the Save Chinatown Movement with a spotlight on activist Mary Yee. I ultimately see that 2 million as a respectable figure because of local stories like these.” 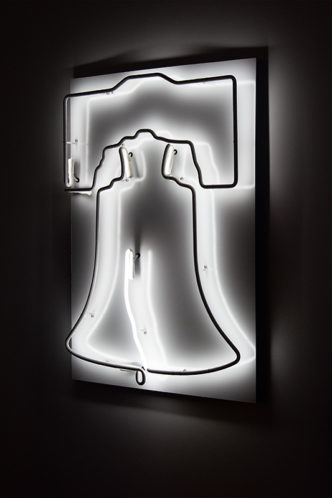 One of two neon sculptures of the Liberty Bell in the exhibit. 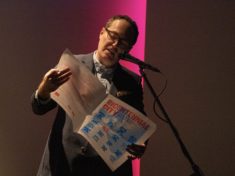 Thomas Devaney speaking during the opening talk and reception for the Bicentennial City exhibition in the Cantor Fitzgerald Gallery. Photo by Arshiya Bhayana ’22 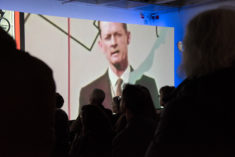 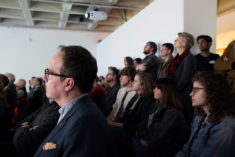 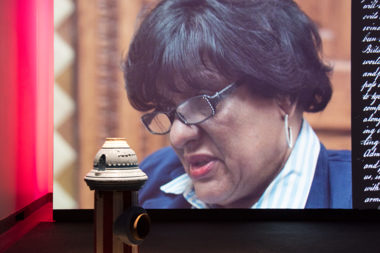 Visitors to the gallery are greeted with a wide-screen presentation of the Doculab film, spanning the entire back wall of the space. In addition, two depictions of the Liberty Bell, crafted from multicolored neon lights, illuminate the space― one created back in 1976 and the other commissioned specifically for this exhibit. For the students and Devaney, the Liberty Bell emerged as a symbol for the promises and shortcomings of the Bicentennial.

The exhibit opening last month featured speeches from Devaney, the five Doculab students, and their collaborators, Aaron Igler and Matthew Suib of Greenhouse Media. Hilary Brashear ’13 also supported the film’s production. There was even a cameo from Provost & Assistant Professor of Chemistry Frances Blase, who commented on the stars and stripes Philly fire plug in the gallery, and who said a few words about 1976 and growing up in South Philadelphia. Many of the film’s interviewees and subjects were in attendance, including Mary Yee and participants from the Vendor Wars.

“It was wonderful to see so many people who had been part of the film, from interviewees to archivists, attend the opening,” said Sansom, one of the Doculab fellows. “Many people came up to me to tell me how much they enjoyed the film. That was the best reception possible. Those whose stories we had filmed felt that the finished product honored their stories. That meant more than anything else.”

Bicentennial City is up in the Cantor Fitzgerald Gallery through March 6.