It’s a familiar semesterly sight on a Sunday afternoon: Haverford students toting their backpacks, some with pillows, and the occasional few with couches from dorm common rooms hoisted above their heads to the Douglas B. Gardner ’83 Integrated Athletic Center (GIAC). Once inside, the over-800 students settle in at Plenary to begin a conversation about how they hope to change Haverford to better support them in the coming semester.

These conversations take the form of Plenary Resolutions, which are amendments or additions to the Students’ Constitution that are written by students, voted on by students, and implemented into Haverford’s culture and practices. This semester, students presented five resolutions—all of which passed by a majority vote and will be sent to President Wendy Raymond for her review and response.

Representatives from the 2018 Clearness Committee presented a resolution focusing on reforming the work of the committee to be more extensive by adding another semester to their timeline, a practice that will be implemented beginning with the next Clearness Committee in 2022.  Sunrise Haverford, the newly-formed chapter of national climate-justice organization Sunrise Movement, presented a resolution asking for environmental concerns to be made a central priority of the work of Haverford’s Strategic Planning Committee. Sadie Kenyon-Dean ’20, a physics major who is conducting her thesis research on the consequences of light pollution, presented a related resolution aimed at addressing light pollution on campus. (Continued after gallery.) 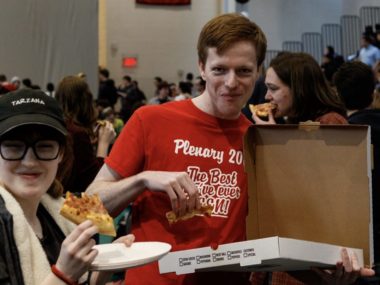 Members of the Alliance of Latin American Students speak at Plenary about a Latinx Center.

A student asks a question of the resolution writers.

66% of the student body, or roughly 840 Fords, had to be present to reach quorum.

Students move a couch into the GIAC for Plenary.

In addition, student representatives from the Committee for Environmental Responsibility (CER) proposed two resolutions focused on conservation efforts on campus. The first, called “Respecting Living Spaces,” stated that students have a responsibility to more completely clean out their dorm rooms at the end of the academic year to ease the burden placed on staff when it comes to turning over rooms and preparing them for new residents over the summer. The second resolution brought to Plenary by CER, “Capital with a Purpose,” is a value statement affirming the student body’s push for the College’s investment committees to consider the environmental and sustainable consequences in making investment decisions concerning Haverford’s endowment.

In order to vote on any of these resolutions, 66% of the student body, or roughly 840 Fords, must be present in the GIAC to enact this form of student self-governance. Following a practice first implemented during Special Plenary in Spring 2018, students for whom attending plenary presents a physical or mental inaccessibility could livestream the proceedings and be counted towards quorum remotely.

Plenary also represents a chance for students to ratify the Alcohol Policy and open ratification for the Honor Code in order to reaffirm their commitment to community standards and holding themselves and each other accountable for fostering a safe and inclusive campus environment. Traditionally, the Alcohol Policy is ratified during Fall Plenary and the Honor Code is ratified in the spring. However, since the student body did not reach quorum during Fall 2019 Plenary, both documents were instead discussed last weekend instead. The Alcohol Policy was ratified by a strong majority, and students voted to open ratification for the Honor Code, which is always officially ratified by a formal vote over email later in the week.

For students, Plenary is a uniquely Haverfordian experience that brings the community together in order to share their opinions and reflections about what kind of institution the college should be. Whether Fords choose to engage by presenting resolutions, speaking in support of a proposed amendment, or simply by being present, Plenary remains a Haverford tradition that solidifies the values of the community and asks us to critically examine what we want our college experience to look like, and what legacy we want to leave for future students.