The red and yellow leaves falling from the College’s trees aren’t the only signs of fall that can be spotted around campus. Passersby on the Nature Trail this weekend might have noticed several jack-o’-lanterns lurking around the bends in the path. The pumpkins, which were carved at an event open to the greater community last Wednesday, were just one aspect of the Arboretum’s annual Fall Festival, which was held last Friday.

The festival, which began in the afternoon and proceeded into the evening, gave students, faculty, community members, and their families the chance to revel in the dawning autumnal season. The daytime activities included a foraging walk along a Nature Trail and a Haverfarm stand, both showcasing the natural bounty that can be found on Campus.

After nightfall, the celebration moved to the Skate House by the Duck Pond, where things took a spooky turn. For the faint of heart, there was a variety of well-lit activities, from lawn-games to s’mores and cider, as well as in-house entertainment from the a capella group Counterpoint.

“The Skate House was surrounded in fairy lights,” said Teruha Stergios ’20, an attendee to the event. “Walking in to the warm room packed with families watching a capella felt like a big holiday.”

Outside, more adventurous spirits could join a guided night excursion along the Nature Trail, where they could witness the jack o’lanterns in full glow. After a walk illuminated by the carved pumpkins, participants in the night hikes were invited to vote on their favorites.

Each contest winner was rewarded with an Arboretum t-shirt for their efforts. For the other attendees, an enjoyable evening packed full with seasonal festivities was a fitting prize for their participation. 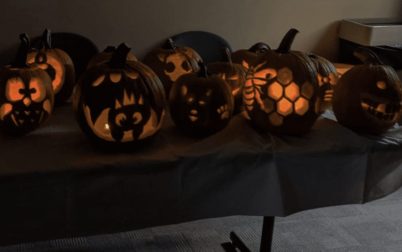 Designing before you cut your pumpkin

Carving pumpkins at an event held by the Arboretum ahead of the Fall Festival.

Ruiming Li with his winning pumpkin, “The Really Evil Demon.” 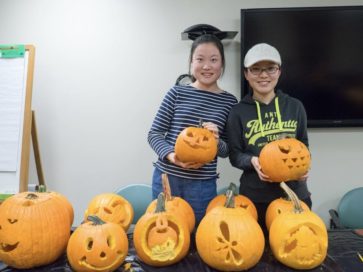 The jack-o’-lanterns were carved to illuminate the night hike. 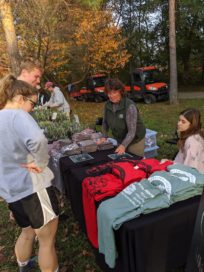 Arboretum t-shirts at the Fall Festival 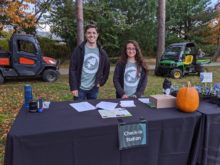 Checking in for the festivities of the Fall Festival

Crafts at the Fall Festival 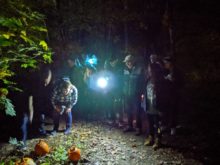