The fifth annual Tri-Co Hackathon began with a talk by Katherine Zuk, the director of communications and outreach for ​Philadelphia Lawyers for Social Equity​, a local organization that advocates for low-income individuals who have come into contact with the Pennsylvania criminal-justice system. In her speech, “Using Technology for Criminal Record Reform,” Zuk shed light on the ways in which the members of her audience—30 students from Haverford, Swarthmore, and Bryn Mawr Colleges with a passion for computer science—could funnel their digital expertise into the pursuit of civil rights, proving that this year’s Hackathon was about more than just coding.

But, of course, there was coding, too. A series of workshops led by ​Nabil Kashyap and Andy Janco, digital scholarship librarians employed by Swarthmore and Haverford respectively, introduced students to several popular software programs: ​g​it/GitHub, which can be used to streamline workflow for collaborative development; Flask/starlette, which can be used to create simple web applications; Bootstrap; and spaCY, which can be used for natural language processing purposes. But when the students broke into six teams to brainstorm ideas for apps, websites, and software programs, they were encouraged to consult the sets of prompts provided by PLSE and ​Puentes de Salud, a nonprofit that promotes the health and wellness of South Philadelphia’s rapidly growing Latino immigrant population, for inspiration.

First held in 2014, the Tri-Co Hackathon brings together students from the three college to ideate and create original digital projects that address specific real-world problems. The catch? They only have 24 hours to do so. Past winners include 2014’s TryLinGO, which utilizes geo-location technology to provide foreign-language translations of nearby objects; 2015’s ReportIt, which allows members of the public to log encounters with faulty infrastructure; 2017’s Smart Camera, which transcribes text contained within photos; 2018’s Blue Bus, an app-based countdown clock which tracks the minutes until the arrival of the next Blue Bus; and 2019’s ​Gradual​, a website prototype which enables Tri-Co students to monitor their academic progress and which received further development in last summer’s Haverford Innovations Program (HIP) Summer Incubator.

This year’s projects, half of which focused on issues related to minority empowerment or legal reform, had a distinct social-justice flavor—thanks, no doubt, to the Hackathon organizers’ decision to partner with PLSE and Puentes de Salud. On Saturday evening, when presentations commenced, this was thrown into stark relief. No less than three teams had developed apps designed to help people locate legal resources related to criminal-record erasure, two of which— Expungenation and Social Equity Resource Database—would go on to take second and third place, respectively.

Additionally, a team of two Bryn Mawr students and one Swarthmore student had created a concept map for a Tri-Co Event Board, a means of “centralizing” Tri-Co events like parties, concerts, and club meetings. Two Fords designed a computer program that processed lifestyle data to suggest ways for users to reduce their carbon footprint, which they dubbed Green Your Life. And a team of five Haverford students—Jacob Valero ’22, Ben Laufer ’23, Anubhav Sharma ’23, Sam Aronson ’22, and Keeton Martin ’22 —claimed first prize for their work on Salud y Dinero, a computer game available in both English and Spanish that aims to make developing financial literacy fun for Latinx kids. (Cont. after the gallery.) 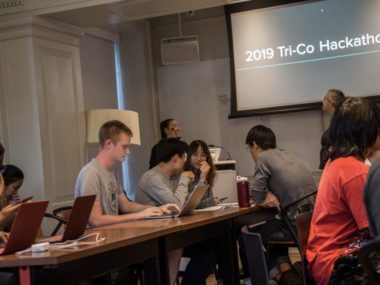 Explaining the logic behind their decisions, judges ​Jen Rajchel BMC ’11, a program manager and experience designer for Café Philadelphia; Dr. Mark Bendett ’79, an entrepreneur-in-residence at the University of Delaware; and Michael Zarafonetis, the coordinator of digital scholarship and research services for Lutnick Library, said that they were impressed by the “creativity” of Salud y Dinero. ​In a statement, Zarafonetis, speaking on behalf of all three judges, praised the five students behind the game for their “​thinking around problem, solution, and audience.”

“They thought really carefully about who would be playing the game and applied principles of user-centered design to the project,” Zarafonetis said. “For example, they edited sprites that were light-skinned by default to have darker hair and skin. They wanted their users, predominantly Latinx children, to see characters that looked like them. They also differentiated their project from other financial literacy resources for kids to show that their idea was unique and met an existing need.”

With the announcement of the winners (and a celebratory round of sundaes), the fifth annual Tri-Co Hackathon came to a close. ​But, as HIP Program Manager Shayna Nickel, who—along with Swarthmore’s Center for Innovation and Leadership and the Tri-Co Digital Scholarship cohort—organized this year’s Hackathon, notes, “just because the Hack is over doesn’t mean project momentum has to end.” In previous years, several Haverford-based Hackathon teams, including the ones behind 2018 awardee Dibs and 2019 awardee Gradual, have managed to translate the raw material of their ideas into the refined product of a genuinely marketable good or service—a feat of intellectual alchemy that is often achieved with support from HIP.

For those interested in further developing an original idea, product, or service while learning the ropes of entrepreneurship, Nickel says, consider applying for the summer 2020 ​Innovation Incubator​, participating in the ​Tri-Co Impact Challenge​ (which will be co-presented by Puentes de Salud this year) on Saturday, October 26, competing in the ​Spark Competition​ on Friday, November 14, or attending one of the many workshops on tech and business HIP is hosting this fall. A full list of resources can be found here: ​hav.to/hipfall​.