Last Thursday’s Hurford Center and VCAM Fall Open House served as the debut of five multimedia art projects—each and every one created by a current or former Haverford student. Developed with the help of HCAH Post-Baccalaureate Fellow Courtney Carter ’17 and supported by the VCAM’s new Malcolm Baldwin 1962 Fund, their radical dissimilarity is a testament to the sprawling boundaries of personal imagination.

It’s hard to imagine two exhibits with less in common than, say, Colin Fredrickson’s Sealed, which consists of 1,353 hand-addressed envelopes stuffed into the framework of the second-floor balcony, and Jixin Jia and Bilge Nur Yilmaz’s Correspondences, an anthology of long-distance communications. Perhaps their one shared trait? The fact that they hold great meaning for their creators.

“The work is based partially on a VCAM installation I did two years ago called Shedding City, a project that featured recyclable waste I collected from around campus for a month and arranged inside a Create Space to resemble a cityscape,” says Fredrickson, a senior cities major, of Sealed. Long passionate about raising awareness of the ways in which even the environmentally conscious among us casually use and discard materials, biodegradable or otherwise,  he hopes to use Sealed to understand the scale of “Haverford’s economic and environmental impact.” (Fun fact: Fredrickson addressed each envelope to the recycling center that it would have been sent to, which he describes as his way of “giving individual character to items that are often comprehended en masse.” From start to finish, the process took about four hours.)

Ultimately, Fredrickson hopes that those who view his work will “think about the broader material ecosystem of Haverford and the scale at which it exists.”

“Haverford may be seen as a small school,” he says, “but looking at this place through the lens of the materials that pass through and sustain it, from envelopes to Amazon boxes, may tell a different story.”

By contrast, Correspondences confronts the sense of separation—from family, from friends, from familiar incarnations of culture and language—that international students anywhere can feel at times.  It’s an emotional experience that both Jia, a junior from China, and Yilmaz, a junior from Turkey, are on intimate terms with. Correspondences, Jia says, is their way of transforming “what was initially perceived as frustration and powerlessness into our source of power.” The exhibit is composed of three separate installations: an experimental short film, titled “The light from my eyes,” in which Jia and Yilmaz face each other from opposite ends of the world; a black-and-white photography series titled “Succession,” which features images of Jia and Yilmaz eating apples, blowing kisses, and drinking from mugs; and a video compilation titled 24/7, which airs clips Jia and Yilmaz have filmed and sent to one another on a loop.

“I find it really fascinating how they devised this whole project over the course of a summer and had to execute it over the course of a summer even though there was so much distance between the two of them,” says Athena Intanate, a first-year from Bangkok, Thailand, who stopped by the open house. “I guess my main takeaway from this is that you can do practically anything regardless of if it’s in your major, if you’re close, if you’re at school, if you’re traveling.”

For her fellow first-year Juan Miguel Pinto Diaz, who met Jia during this year’s Customs Week, Correspondences’s simplicity is its greatest strength.

“I really enjoy how it’s so small-scale,” Diaz says. “It doesn’t try to be more than it is. It’s just about this relationship between two people across the globe and how interconnected they can be even with all these barriers, how they can send each other visual poetry and collaborate on beautiful photography.”

No work of art is created in a vacuum, however, and Correspondences is no exception: Jia cites Carter, as well as Associate Director of the Cantor Fitzgerald Gallery and Campus Exhibitions Matthew Callinan, photographer and printer Lisa Boughter, and sophomore Çiçek Yavuz, as a major source of intellectual and practical support over the course of the several months in which he and Yilmaz labored to bring their project to life.

“Courtney followed the entire project from beginning to end,” he says. “She is really amazing, taking care of many things for us, and helped us to develop the ideas and projects. She respects our vision but also pushes us to think more deeply.”

It was undoubtedly good practice for Carter, a Haverford graduate with aspirations of becoming a museum curator one day in the near future.

“The project really started when Jixin and Bilge came to me and said, ‘We have some ideas for a collaborative art project, and we know we want to do film and photography,’” she says. “They knew that they wanted to do something related to poor long-distance communication technologies, or, if not poor communication, at least the funky glitches and things that become part of the vocabulary and the visceral experience of being long-distance from someone that you care about.”

Funnily enough, “poor long-distance communication technologies” is an apt description of the focus of another of the five student exhibits: junior Alexandra Iglesia’s Boicemail. A short and markedly abstract film, Boicemail, as Iglesia’s wall-mounted artist’s statement makes clear, grew out of her observation that her Google Pixel 2.0 was unable to accurately transcribe her Filipino-accented grandmother’s voicemails.

“This provoked many questions surrounding accents and identities for me,” says Iglesia, a newly-declared visual studies minor and a co-head of the Filipinx affinity group Bi-Co Barkada, “ultimately leading to a self-reflective statement that I am rather distant from my Philippine roots, which can be considered a result of neocolonialism and my family assimilating to white American culture.”

Boicemail, which includes clips of Iglesia making soup, frosting a cupcake, and watching an ad for Coca-Cola, is, Iglesia says, “more experimental and autobiographical than pieces I’ve made before.” Unlike Fredrickson and Jia and Yilmaz’s projects, however, Boicemail was originally produced for a class: “Documentary Production: Approaches to Truth,” taught by Visiting Senior Lecturer in Visual Studies Vicky Funari, whom Iglesia praises as someone “who completely changed my educational experience at Haverford.” Its presence in the VCAM this fall is at the behest of Digital Media Specialist Charles Woodard, another of Iglesia’s campus mentors, who contacted Iglesia over the summer to ask if Boicemail was available for exhibition.

“Originally, I created the film mostly for myself as a self-discovery project,” Iglesia says. But she said yes to Woodard, having realized “how it can be helpful for the folks who have experienced something similar and want to find solidarity while learning more about their own identity.”

At the open house, where she witnessed many members of the Haverford community donning headphones to watch Boicemail, Iglesia saw her work affecting people in real time.

“Many viewers have told me that the film made them both laugh and think, which is more than what I could’ve asked for,” she says. “I hope that I continue to get these sorts of reactions.” (Continued after the gallery.) 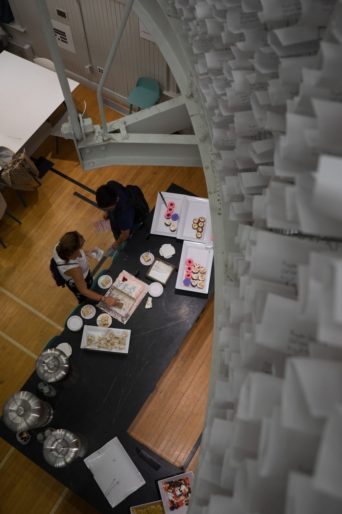 A view of the VCAM/HCAH Open House Snacks from behind Colin Fredrickson’s “Sealed.” 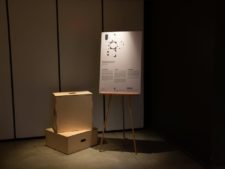 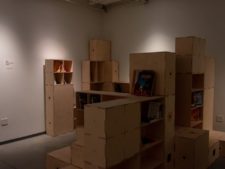 Unboxed is a showcase of the project Nicky Rhodes and Austin Huber worked on as 2019 Innovation Incubator Fellows.

Open House is Nicky Rhodes and Austin Huber’s open-source building system whose main component, a “boxel,” is marketed as a “building block for the Information Age.” 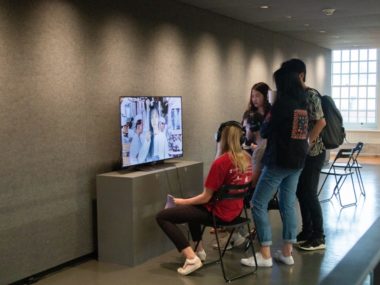 Colin Fredrickson’s “Sealed” consists of 1,353 hand-addressed envelopes stuffed into the framework of the second-floor balcony.

Colin Fredrickson’s “Sealed” consists of 1,353 hand-addressed envelopes stuffed into the framework of the second-floor balcony. 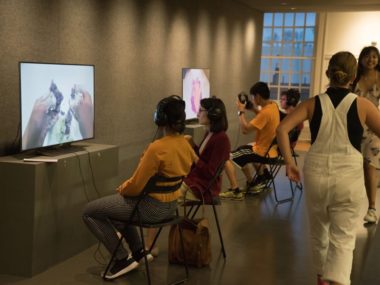 Daniela Moreira’s “Food and Purity” is a response to the oft-extreme rhetoric of religious diet culture.

Directly adjacent to Boicemail is junior Julia Coletti’s Panic, a short film that makes use of stop-motion animation, experimental sound mixing, and archival footage to portray life “in an “age of anxiety.” (Panic was also made for Funari’s class). Parodying TV commercials for prescription drugs, it ends with a rapid-fire voiceover running down a terrifying list of symptoms: “sudden overwhelming fear,” “heart palpitations,” “excessive sweating,” “trembling,” “shortness of breath,” “sense of choking, “chest pains,” “nausea,” “dizziness,” “feelings of detachment from the world,” “numbness or tingling of the limbs,” “excessive sweating,” “chills or hot flashes,” and  “sensations of dying.”

Panic, Coletti says, grew very organically out of what she describes as an “inability to produce what I actually intended and the way in which my mind, whether that be mental illness, doubt, or lack of sleep, just kept getting in the way.” But though Panic is meant to embody personal experience, the impression it leaves is one of sheer relatability; in an era rife with social division and political tension, feelings of constant, subdued disquiet have transcended the individual sphere and passed into the universal one. In this sense, Panic manages to achieve the goal Coletti set for herself at the outset: to communicate “feelings of anxiety that many people share in some way or another for a variety of reasons.”

One floor down, you can find Unboxed. Located next to the ground-level Create Space, Unboxed is a showcase of the project recent Class of 2019 graduates Nicky Rhodes and Austin Huber worked on as 2019 Innovation Incubator Fellows: Open House, an open-source building system whose main component, a “boxel,” is marketed as a “building block for the Information Age.”

Upstairs, first-year Daniela Moreira’s Food and Purity stands as a response to the oft-extreme rhetoric of religious diet culture, which conceptualizes the act of eating as one that either enables you to “live longer, better, purer” or “perish to sin”—middle ground be damned. Moreira drew inspiration from the material she read in Professor of Religion Ken Koltun-Fromm’s “Food and Religion” class, which she took as part of the Chesick Scholars program over the summer. Most, especially Gwen Shamblin’s The Weigh-Down Diet and Elijah Muhummad’s How to Eat to Live, she observed, leaned on pervasive cultural tropes—that people who can’t control themselves around food are “pigs,” that dieting involves following a set of “laws,” that the end goal of a diet is “beauty”—to get their message across. Struck by this discovery, Moreira made a series of papier-mâché sculptures—a human eye, a pig’s head, a gavel—to challenge such popular wisdom.

The end product, currently on display in VCAM 201, is “the best activation of that space I’ve seen yet,” says Weissinger.

Sealed, Correspondences, Boicemail, Panic, Unboxed, and Food and Purity will be available for viewing in the VCAM until Friday, October 11. But if you don’t make it over in time to see them, don’t worry—there’s many more student exhibits to come!

As Weissinger makes clear, “This is just the start.”