On Saturday, May 18, the College held its 181st Commencement ceremony, welcoming the 318 members of the Class of 2019 into the Haverford College alumni community.

As part of the ceremony, the packed crowd in the Field House was treated to remarks from student-chosen speakers Elom Tettey-Tamaklo ’19, a political science major with an African and Africana studies concentration who spoke on the importance of community and mentioned that it was his dream to be Commencement speaker since he heard his Customs person Brian Guggenheimer give the remarks in 2016, and Raquel Esteves-Joyce, who works in the Deans’ Office and the Office of Academic Resources and who gave a speech encouraging students to write (and keep rewriting) the stories of their lives. “Don’t let fear get you stuck, unwilling to move and take risks,” she said. “Take back your power and write yourself out of corners and shadows. Write yourself into the center and at a table with seats for everyone. Write a world where no one is illegal, inconsequential or invisible.”

Bryn Mawr College President Kimberly Wright Cassidy gave a reading from Ralph Ellison’s Invisible Man, noting that the ceremony represented a transition not just for the graduates but for President Kim Benston too, who will step down at the end of next month and return to the faculty. “Ellison’s words resonate on this occasion for many reasons,” said Cassidy. “They speak to Kim Benston’s ethical commitment to diversity, history, and community, and to the goals of a Haverford education. They evoke the abiding power of the humanistic study to which Kim has devoted so much of his life, and they echo Haverford’s commitment to a values-centered liberal education aimed at ‘examining ethical decision-making process and choices so that [you] can lead lives that speak.’”

Benston spoke too, reminding the audience of the importance “childlike adults,” and noting that it is young people, like the student activists in Parkland and elsewhere, who demonstrate that “authentic maturity is defined not by age… but by an all-embracing care of others.” The final two speakers were recipients of the College’s honorary degrees: groundbreaking litigator and GLAD Civil Rights Project Director Mary Bonauto and stereotype-breaking actor, director, and producer Daniel Dae Kim ’90.

Wondering about the people who make up the Haverford College Class of 2019? A full list of the graduates and their areas of study, and senior thesis titles gives a small snapshot of these remarkable people.

Relive Commencement 2019 in this photo gallery or watch the video of the entire ceremony below: 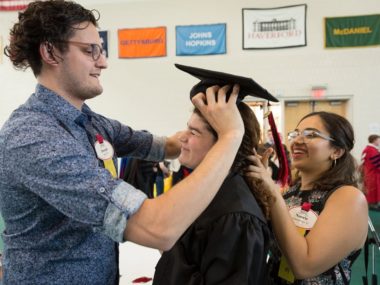 Joseph Spir ’20, left, and Noorie Chowdhury ’21, right, help Abby Harrison ’19, center, with her cap during the Robing Ceremony in the GIAC. Photo by Dan Z. Johnson

Ruiyi Yuan ’19 taking a selfie with her mother outside of the GIAC before the Robing Ceremony. Photo by Dan Z. Johnson

Abby Harrison ’19, left, and Cooro Harris ’19 are excited about Commencement. 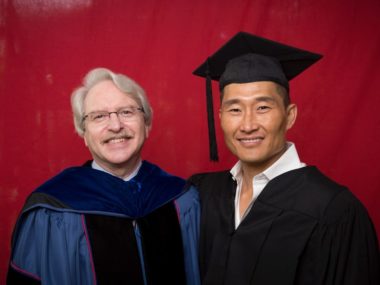 Student speaker Elom Tettey-Tamaklo ’19 walks to the stage to give his remarks. 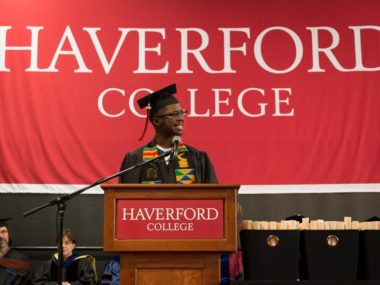 Tettey-Tamaklo ’19 was chosen by his classmates to give a speech at Commencement.

Raquel Esteves-Joyce was selected by the students as the staff speaker. 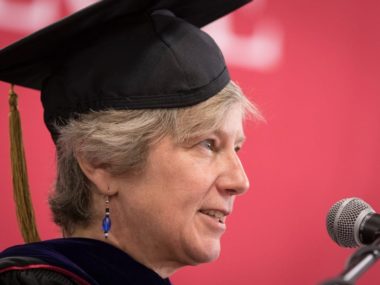 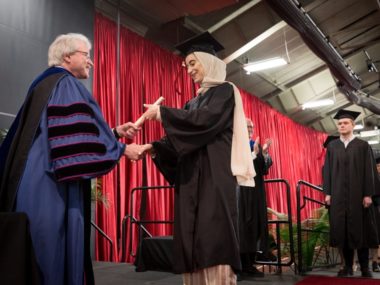 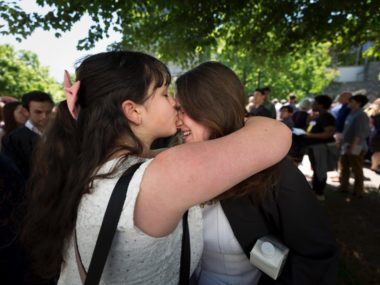 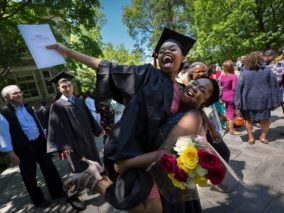 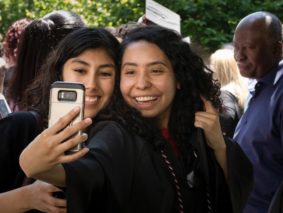