Here’s what Watt has to say about his course:

In the 1930s and 1940s, members of the Religious Society of Friends (the Quakers) engaged in a number of remarkable—and highly controversial—activities aimed at providing assistance to people who were being persecuted by the Nazis. Those actions were criticized by some U.S. citizens, who thought that Quakers were giving unwitting aid to the Nazis, and derided by Nazis such as Joseph Goebbels, who thought that Quakers were demonstrating a complete lack of awareness about how the world really works. Nevertheless, Quakers’ actions did end up saving some lives. Students in this course have a chance examine what Quakers accomplished—and failed to accomplish—in the 1930s and 1940s. Students in this course don’t attempt to decide, once and for all, which of the Quakers’ actions were wise and which were foolish. Instead, students reflect on the ethical questions with which Friends wrestled in the 1930s and 1940s and compare those questions with the ones they face themselves.

This semester is the first time that “Ethical Struggles in Catastrophic Times” was offered, and the College chartered a bus to take the students to the United States Holocaust Memorial Museum in Washington, D.C. so that they could see a new exhibit on Americans’ responses to the Holocaust. Looking at the exhibit gave students a chance to think about the ways in which American Quakers’ responses to the Holocaust were different from—and similar to—those of other Americans. 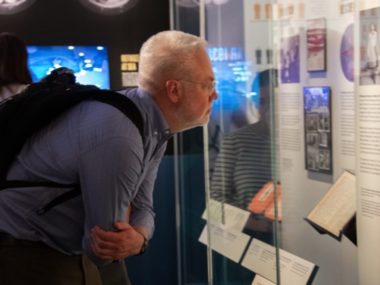 A student exploring the “Americans and the Holocaust” exhibit.

Students in David Harrington Watt’s class went to the Holocaust Museum to see the exhibit on American reactions and responses to the Holocaust. Photo by Jacob Gorenburg ’22.

As far as I know, Haverford College is the only school in the nation that offers a course that focuses exclusively on Friends’ response to the Holocaust. Scholars who specialize in Holocaust Studies or in the history of the Religious Society of Friends are well aware of Quakers’ attempts to mitigate the damage caused by the rise of Nazism. But those attempts have not received much attention from non-specialists.

The creation of “Ethical Struggles in Catastrophic Times” was a collaborative enterprise. A colleague of mine who teaches at Temple University was the person who first suggested I develop the course. As I worked on it, I received a great deal of assistance from the Office of the Provost, from Haverford students, from Haverford professors, from scholars who teach at other schools, and from the staff of the United States Holocaust Memorial Museum.

I can’t say that “Ethical Struggles in Catastrophic Times is an enjoyable course to teach. It’s not. It forces me to think about difficult issues. But teaching this course has taught me a lot. Analyzing Quakers’ responses to the Holocaust with a group of extraordinarily gifted Haverford students has changed my understanding of both the Holocaust and of the history of the Religious Society of Friends.

See what other courses the Department of Religion is offering this semester.