With dance, music, video projection, and modeling, the Second Annual Black Students’ League (BSL) Fashion Show sourced from a wide range of student talents to address complex themes of race and politics, in particular the experiences of students of color at predominantly white institutions. The Visual Culture, Arts, and Media (VCAM) building’s presentation lounge was filled to capacity with students, faculty, and family who witnessed a show that was bold in its artistic vision and messaging.

“This year’s show was a lot more heavy than last year’s show,” said BSL co-head and director of the show Aszana López-Bell ’21. “It wasn’t just pretty, and I don’t think all audience members left feeling comfortable. But I wanted it to stir up emotion, and so I feel like it went well.”

In the three-act show, titled Black Face, White Mask, students modeled clothing that focused on veiling or concealing one’s face, representing how students of color often “mask” themselves in order to fit in or feel safe. In between acts, other media augmented the runway presentation. These included video segments, like one that juxtaposed the 2018 Yellow Vest protests in France with the 2015 protests against police brutality in Baltimore, and dance performances by Lourdes Taylor ’21, Jasmine Stanton BMC ’20, and Haverford’s step team. The show concluded with all models casting their masks into the audience. 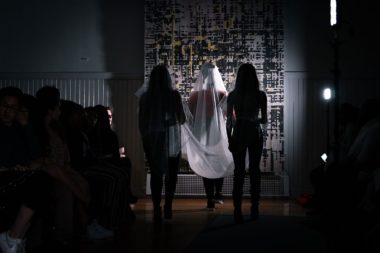 Casting off the masks at the ending of BFWM. Photo by Alexandra Iglesia ’21

Performers after the show. Photo by Olivia S. Wong ’22

“We wanted to make an exciting and thought-provoking display of black emotions ranging from the despair that often times comes with the stressors of being a Black American but also display the pure joy that comes from black people empowering themselves by coming together as a proud and independent group,” said Gabe Pascal ’21, a BSL co-head.

As was the case last year, the show was highly anticipated around campus. A line to enter the VCAM started an hour before show time, and unfortunately there wasn’t enough room in the VCAM for everyone to enter.

“From what I can gather, those in attendance were pleased with how the show was presented and were challenged to think more deeply about the implications of blackness in America,” said Pascal.

Those who did find a seat saw a show that came together as a product of immense student leadership. López-Bell spearheaded the effort, and was aided by BSL’s fashion show committee, which included Pascal, Nyla Robinson ’21, Robert Bramble ’21, and Kymon Harrington ’20. Talia Scott ’19, a former BSL co-head, also lent support. A team of students, including BLAST (Haverford’s student-run sound-engineering and lighting-design group) also provided technical help to make the many moving parts of the show run smoothly. Besides providing a powerful viewing experience, the show stood as testament to the impressive creative vision of the students.

“I learned a lot about myself, and I really feel like I challenged myself creatively,” said López-Bell. “I know what I am capable of now, and so I guess I don’t feel so fearful anymore, to do cool stuff. And I learned to ask for help, and how helpful and understanding my friends and peers could be.”