When a once-in-a-lifetime opportunity to experience the rich and diverse culture of Japan arose, Haverford students did not let the opportunity pass them by. For 10 Haverford and Bryn Mawr students, spring break was the perfect chance to learn about Japan’s history and diplomatic relationship with the United States through the Ministry of Foreign Affairs of Japan’s Friendship Ties Program (KAKEHASHI Project), which sponsors students from North America to “promote mutual trust and understanding and build a basis for future friendship and cooperation.”

These 10 Bi-Co students were joined by students from Villanova University and Ursinus College and professors, including Haverford’s Japanese Drill Instructor Minako Kobayashi. Their trip, funded by the Ministry of Foreign Affairs and at no-cost to students, included stops in Tokyo, Nambu Town in the Aomori Prefecture, Hokoji Temple, Hachinohe Gakuin University, Sensoji Temple, and Meiji Jingu Shrine in Harajuku.

“We could not pass up on this opportunity, as experiencing a foreign country first-hand can bring students something personal and invaluable, which is beyond what they can learn in the classroom only,” said Kobayashi and fellow instructor Tetsuya Sato, who was also involved in the selection process, ahead of the trip. “We hope that the participants will make a lot of observations, stay open-minded, and keep records of their experiences. What they take away from it may vary, and that is just fine. We believe any findings will be meaningful.”

Xiangruo Dai ’21, an economics major living in Toronto, Canada, who has studied Japanese for two years, particularly enjoyed the trip’s diverse views of Japan, from bustling Tokyo to the rural Aomori Prefecture more than 400 miles north.  “[We got] to look at traditional Japanese cultural characteristics in Tokyo, discover rural Japanese living and homestay in Aomori, and also high-tech Japan in Tokyo,” said Dai. “We also met with prominent figures in U.S.-Japanese relations, such as a former US ambassador to Japan.” 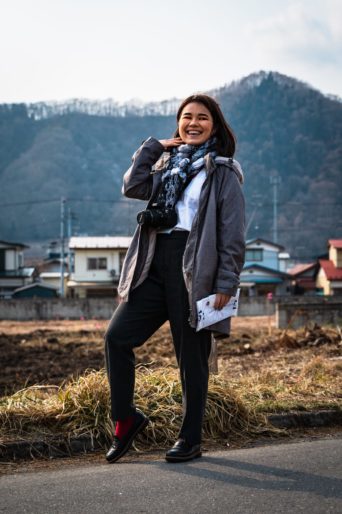 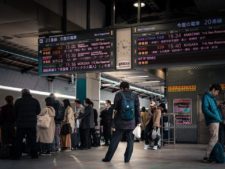 Waiting for the Shinkansen at Tokyo Station. Photo by Alexandra Iglesia ’21. 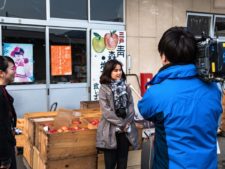 Miki Duvoisin ’21 being interviewed in Nanbu Town, Aomori for the local news. Photo by Alexandra Iglesia ’21. 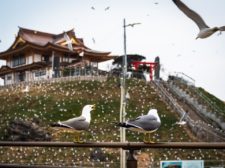 Seagulls at the Kabushima Shrine located in Hachinohe, Aomori. Photo by Alexandra Iglesia ’21. 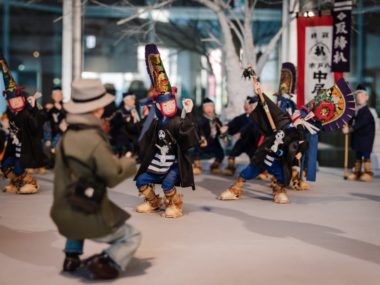 An exhibit at the Hachinohe Portal Museum “Hacchi” of the Emburi festival held in their city annually. Photo by Alexandra Iglesia ’21.

One of the takoyaki vendors at the Sensō-ji Temple in Tokyo. Photo by Alexandra Iglesia ’21. 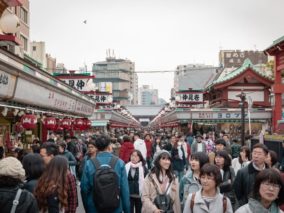 The shops at the Sensō-ji Temple in Tokyo. Photo by Alexandra Iglesia ’21. 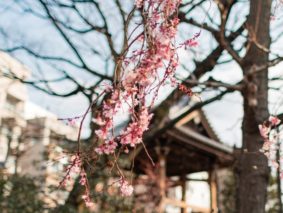 Early signs of spring at the the Sensō-ji Temple in Tokyo. Photo by Alexandra Iglesia ’21.

Students on the trip came from a variety of academic disciplines and backgrounds, and though not all had previously studied Japan or the Japanese language before, about half had taken courses in the Bi-Co Japanese Language Program. For Joseph Spir Rechani ’20, an anthropology major who has never taken a Japanese course, the experience was eye-opening for his future studies.

“I’ve always thought of myself as a world citizen, but how could I see myself as such if there is another half of the world that I have yet to explore?” he said. “I applied because the anthropologist in me wants to have as much of a holistic mindset as possible, and because it is my duty as a Haverford student to keep exploring, seeking discomfort, and enriching my views of the world.”

Spir Rechani’s favorite part of the trip was a two-night homestay in the Aomori Prefecture.

“I loved the small streets, the interesting corners, the thousands of vending machines, and the wonderful people that make Japan more than what meets the eye,” he said.

From learning the Zazen style of meditation from a Buddhist monk to performing karaoke in Tokyo, the KAKEHASHI Project experience was full of unique ways of experiencing Japanese culture in an exciting and immersive setting.

Much of the students’ trip was documented on the local news in Japan, including an interview with East Asian languages and cultures major Mikiko Duvoisin ’21 in Nambu Town of the Aomori Prefecture.

“[Walsh] gave a talk after we came back from Aomori about how we should utilize our world views as a proactive measure, as well as the paths and options that you have with the Foreign Service Office,” said Spir Rechani. “He talked to the entire KAKEHASHI consortium, so he really showed how extensive our alumni network is!”

Organizing four different colleges on an international trip is no small undertaking, and Kobayashi extends warmest thanks to those who made the journey possible.

“We would like to thank Mr. Masaru Sato, deputy consul general and director of Japan Information Center, and Mr. Ryusuke Shimada, of the Consulate General of Japan in New York  for nominating us for the KAKEHASHI Project,” she said. “We are also grateful for the support from Rebecca Avery, director of study abroad and international exchanges, and the Provost’s Office. Finally we also want to extend our deepest appreciation to all Japan International Cooperation Center staff and the related people.”

Beyond the nine-day trip itself, Kobayashi hopes that her students are eager to share their newfound appreciation for Japanese culture with the rest of the Bi-Co community.

“Regardless of their study background, she said, “we are hoping that they will be proactive in sharing their experiences with the campus community and beyond, and hopefully stay in touch with Japan for years to come.”